The astronauts launching on space shuttle Atlantis this afternoon will experience fatigue, muscle and bone-density loss, and a host of... 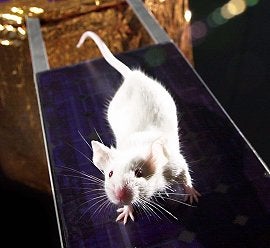 A mouse-astronaut candidate poses atop a model solar panel. Its compatriots, flown on space shuttle Endeavour, led to a discovery that the immune system is compromised in space. Wikimedia commons/NASA
SHARE

The astronauts launching on space shuttle Atlantis this afternoon will experience fatigue, muscle and bone-density loss, and a host of other space ills during the next couple of weeks. But their counterparts who will one day travel to Mars face greater problems — their immune systems will be compromised, thanks to genes that behave differently in space.

Spaceflight changes the activity of genes that control immune and stress response, according to a new study of space-flown mice at the University of Arizona.

A mouse-astronaut candidate poses atop a model solar panel. Its compatriots, flown on space shuttle Endeavour, led to a discovery that the immune system is compromised in space.

Mice-tronauts that flew aboard space shuttle Endeavour in 2007 participated in the discovery, which will be published May 15 in the Journal of Cellular Biochemistry. Immunobiologist Ty Lebsack and his colleagues focused on the thymus gland, which serves as proving grounds for T-cells, the immune system’s main players. The team looked at gene-expression patterns in four healthy mice that spent 13 days in space, and compared them with the genes of four healthy mice that stayed on the ground.

They found that 970 genes in the space mice were regulated differently, according to a UA press release. When the changes were averaged, the team found 12 genes were significantly changed in all four mice. The genes affect signaling molecules that play a role in programmed cell death, Lebsack says.

That’s important, because while programmed cell death is a key immune function, it must be kept under control. The body needs to get rid of cells that are no longer necessary or are damaged — but the process can’t get out of hand.

The varying gene expression could mean just that, however. Many of the genes whose activity was down-regulated in the space-flown mice play important roles in maintaining that balance,” Lebsack said. “Potentially, you could get more cell death aboard a spacecraft because of these differences.”

Other immune-system worries stem from stress, a tough work schedule and close living quarters. NASA has long studied how to protect astronauts from space bugs, and a study flying up on Atlantis later today will further those efforts. Bacteria that are harmless on Earth can cause problems in space — if they’re tough enough to live in that harsh environment, they might become resistant to antibiotics, too. Plus, gravity makes bacteria grow differently. In the latest experiment, scientists want to find out whether certain kinds of bacteria will grow on special surfaces designed to prevent them.