A groundbreaking new device has given an artificial heart recipient new freedom, replacing the 400-pound machine that kept him tethered to the hospital 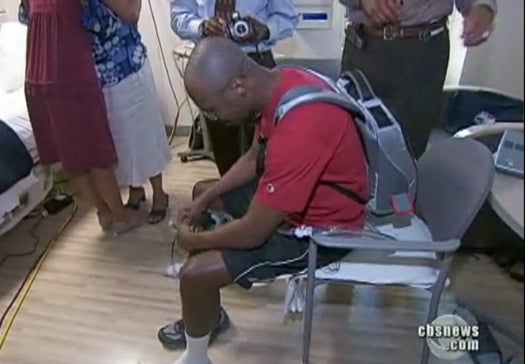 For two years, Charles Okeke, 43, was just another patient confined to a hospital while awaiting a human heart transplant. Now, he’s the country’s first test subject for a battery-operated, backpack-sized console, called the Freedom Driver, which will power his artificial heart and allow him to go home for the first time in two years.

Charles Okeke, 43, received a heart transplant 10 years ago after suffering a blood clot. After his body rejected the heart in 2008, he had no choice but to spend his days hooked up to a 400-pound machine while surviving off of a “total artificial heart.” Although the artificial heart pumps blood just like a human heart, it restricted Okeke from living normally as a husband and father of three.

The device, which was developed by SynCardia systems and received FDA approval less than two months ago, weighs just 13.5 pounds and connects with tubes attached to the artificial heart. While the driver comes with two onboard batteries and a power adapter, wearers can also charge it with wall power or through a car outlet. A small display screen shows the wearer’s beats per minute, fill volume, and cardiac output. The driver also comes in two styles: shoulder bag and backpack, as Okeke demonstrates in the video below:

Although Okeke still awaits a new human heart, doctors have said that he can live off the console indefinitely. Still, there are risks. Since no one else in the country has tested the Freedom Driver, doctors are unsure whether the console will provide enough power to maintain Okeke’s liver and kidneys, as well as his heart.

In the meantime, Okeke said that he will try to stay healthy while enjoying time at home. The Syncardia total artificial heart costs about $125,000 and around $18,000 per year to maintain, but for Okeke, the chance to sleep in his own bed and play freely with his children is well worth it.