System Stores Wind and Solar Power in the Form of Natural Gas, to Fit Neatly Into Existing Infrastructure

It’s abundantly clear that we need to get off fossil fuels for various reasons (try Googling “oil spill”), but our... 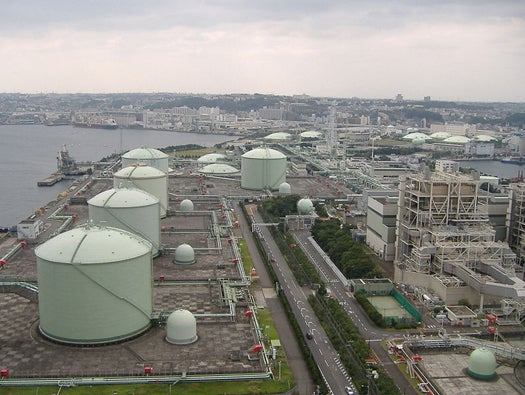 It’s abundantly clear that we need to get off fossil fuels for various reasons (try Googling “oil spill”), but our infrastructures are far better tuned for the hydrocarbon fuels of the past century than the renewables of the next. So why don’t we just make fuels that work in our existing technology from renewable energy? A German-Austrian research collaboration has engineered a means to turn electricity from wind a solar resources into carbon-neutral natural gas that can be stored and deployed within existing natural gas infrastructure.

The process hopes to create the storage capacity for renewable power sources that they so sorely lack. When the wind is blowing and the sun is shining, excess power is siphoned off and used to split water through electrolysis. But rather than storing the hydrogen gas for use in fuel cells — technology that, while potentially game-changing, is not widely employed — a simple chemical reaction between hydrogen and carbon dioxide is used to generate CH4, or a synthetic version of methane.

That methane can be stored in existing natural gas facilities for use when renewable fuel sources are having an off day. Those supplies could also be used as a heat source during cold winters or burn in natural gas powered car engines. The synthetic methane does release carbon emissions into the air, but since the CO2 used to make the synthetic methane is pulled from the atmosphere rather than the ground, the process only returns the carbon it initially pulled out.

And keep in mind this is envisioned as a backup storage system rather than a shift to a natural gas economy. On breezy, sunny days the synthetic methane stays in its tanks and the world turns on carbon-free power. The team has a demo plant up and running in Stuttgart, and a larger double-digit megawatt system is planned by 2012.