People with balance disorders may relearn how to walk correctly with the help of an electronic vest. 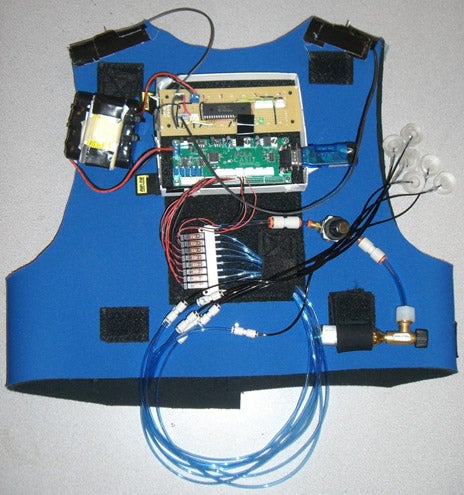 Relearning how to walk after suffering disease or injury is no easy feat, but researchers at UCLA’s Center for Advanced Surgical and Interventional Technology (CASIT) have unveiled an electronic vest that may help rehab patients regain their balance.

The vest, equipped with pneumatic balloon actuators, accelerometers across the shoulders, and an air tank strapped on the right side, gives the wearer physical cues for guiding movement. After measuring the wearer’s wobbliness, the control system inflates the balloons, which use pressure points to give the wearer feedback on how he or she is tilting before a fall. Kind of like rubbing up against an invisible barrier.

Leg amputees may also benefit from the vest, as it can be hooked up with prosthetic devices to steady the wearer’s balance. A cuff attached to the wearer’s thigh presses his upper leg according to the direction of his movements. Researchers surmise that physical cues, as opposed to verbal or visual directions, will help amputees grow accustomed to a prosthetic more easily.

Although vest-based tactile systems are nothing new, CASIT’s invention is the first to be used for physical rehabilitation. Other models have been developed for gaming and other simulations.