When it comes to your living cells size does indeed matter, and a team of MIT and Harvard scientists has... 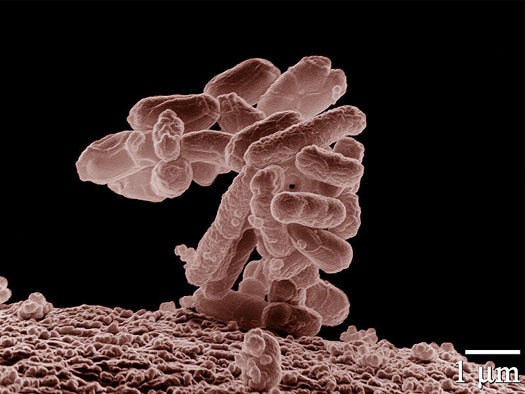 Cells like that of the e. Coli bacteria above grow at uneven rates; a new cell-mass sensing technology from MIT and Harvard researchers could help researchers establish why.
SHARE

When it comes to your living cells size does indeed matter, and a team of MIT and Harvard scientists has figured out how to measure them with unprecedented accuracy. Using a sensor that is sensitive enough to weigh a single cell, the team managed to record the rate at which cells accrue mass over time, data that could help them establish the mechanisms by which single cells grow and how those processes fail when cells turn cancerous.

Using a cell-mass sensor – a device that debuted in 2007 – the team measured four types of cells, two strains of bacteria, one strain of yeast and one sample of mammalian lymphoblasts. The cell-mass sensor works by allowing cells to flow one at a time through a tiny channel etched into a piece of silicon that vibrates inside a vacuum; as cells move through the chamber singularly, their masses change the vibration enough that researchers can calculate their masses from the changes in frequency.

But the real innovation stemmed from a new method of trapping a cell within the microchannel, manipulating the flow direction in such a way that the same cell passes through the channel repeatedly. Each time it passes through researchers can take a new measurement, recording the growth of a cell over a period of time as lengthy as 30 minutes.

The team found that some cells grow exponentially – growing faster and faster the larger they get – which has interesting implications for cancer research. If cells grow exponentially, then it follows that when they divide into two daughter cells of slightly different masses one should grow quite a bit larger than the other over time. If that were the case, cell sizes would vary greatly, but in most cases they do not. Something, therefore, is governing the growth process, and tapping into that cellular process could inform cancer research in profound ways.

The team is now working up a means to add other things to the fluid channel in the cell-mass sensor – antibiotics or cancer drugs for instance – to see if cell growth can be manipulated by such means. The research is still preliminary, but this scale for weighing life’s miniscule building blocks could pay massive dividends for cancer researchers and biologists in near future.