Researchers Witness and Image Atomic Spin for the First Time

Theoretically speaking, we could exponentially increase computing power and capacity as well as build faster, more efficient electronic devices if... 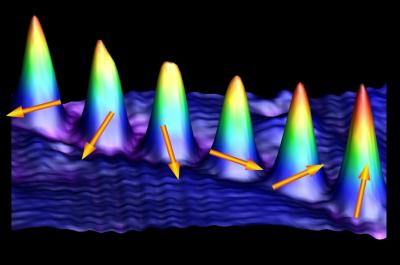 Theoretically speaking, we could exponentially increase computing power and capacity as well as build faster, more efficient electronic devices if we could but harness and manipulate the way in which electrons in individual atoms spin. But until recently, no one had been able to empirically observe this quantum characteristic in action. Now, researchers in Germany have seen atomic spin for the very first time, and captured a few tiny images to prove it.

A study published in the journal Nature Technology details how the team, composed of German and American physicists, built a custom microscope with an iron-coated tip to coax cobalt electrons to dance to their lead. By carefully positioning cobalt atoms on a plate of manganese, they were able to change the direction of the electron spin through tunneling microscopy, suggesting that we mere humans indeed can manipulate electrons at the quantum level.

That’s exciting on a variety of fronts. For one, spintronics – an emerging and experimental field of electronics research – could one day replace our conventional electronics with smaller, more powerful devices. But more scintillating are the exponential leaps we could make in computer memory and processing by harnessing the spin in individual atoms.

“Different directions in spin can mean different states for data storage,” said Saw-Wai Hla, associate professor of physics and astronomy at Ohio University and a lead reseracher on the study. “The memory devices of current computers involve tens of thousands of atoms. In the future, we may be able to use one atom and change the power of the computer by the thousands.”

But all that is still a ways off. To create a commercial device powered by electron spin, scientists will have to manipulate spin at room temperature, and right now they’re more than 500 degress away from that milestone. The cobalt atoms in the experiment had to be cooled to 10 degrees Kelvin (-442 degrees Fahrenheit) with liquid helium in a vacuum in order for the researchers to observe electron spin. But visual confirmation that spin indeed exists and that we can influence the way it all goes down is the first big step into the future of computing.