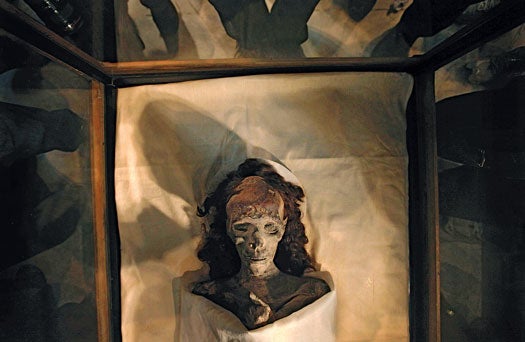 Scientists once suspected that this 3,300-year-old corpse was King Tutankhamun’s mother. They were close. The mummy is now believed to have been his grandmother—his only grandmother. Using CT-scan analysis and the first DNA tests able to amplify the genetic material of the desiccated Egyptian mummies, an international group of scientists and consultants with the Family of Tutankhamun Project found that King Tut’s parents were full brother and sister, born of this woman. The group’s research, published in February, discovered that this previously anonymous mummy known as the Elder Lady was actually Queen Tiye, whose children together sired a minor king famous for the treasures that rested untouched in his tomb until its discovery in 1922 by Egyptologist Howard Carter. The research also revealed that the sickly young man, who had a club foot and an unhealed broken thighbone, probably died at age 19 from malaria.