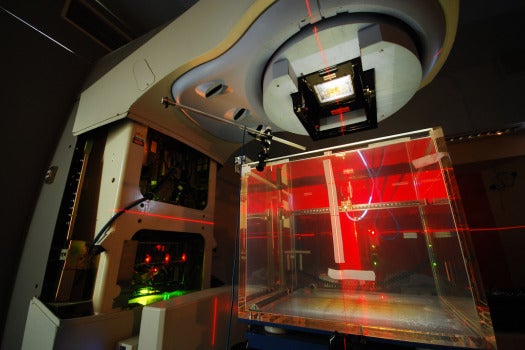 One of the major downsides of radiation therapy, which is commonly used to shrink cancerous tumors, is its harmful effect on normal cells. Now, thanks to research done by scientists at the Albert Einstein College of Medicine of Yeshiva University, doctors may someday use melanin-covered nanoparticles to administer higher doses of radiation to cancerous cells without compromising the healthy ones.

Ekaterina Dadachova, Ph.D., and her colleagues at the university recently tested the particles in mice, which responded well to the technique after exposure to radiation.

Symptoms of bone marrow damage include a drop in the number of white blood cells and platelets. Melanin, a pigment responsible for skin color, not only curbs the formation of free radicals, which damage DNA, but it eliminates the ones that manage to form anyway. To create melanin particles tiny enough to squeeze through the liver, lungs, and spleen, Dr. Dadachova and her team layered several coats of synthesized melanin on silica (sand) particles. The particles, once injected into mice, clung onto bone marrow, as the researchers intended.

After experimenting on groups of mice subjected to various doses of particles and radiation, Dr. Dadachova and her team found that those who received melanin prior to radiation experienced less symptoms of bone marrow damage. Even better, mice who were injected with the melanin nanoparticles recovered their white blood cells and platelets much faster than the other mice did.

Dr. Dadachova and her colleagues observed no side effects to the treatment. Although some nanoparticles could be found in the bone marrow 24 hours after their injection, she maintained that phagocytic cells would remove them before they could inflict any damage.

Clinical trials testing the melanized particles on cancer patients may begin two or three years. Dr. Dadachova also surmises that the technique has potential for protecting astronauts against radiation exposure.