How do you make a pig more environmentally palatable? Researchers in Canada have decided to start with the nastiest stuff... 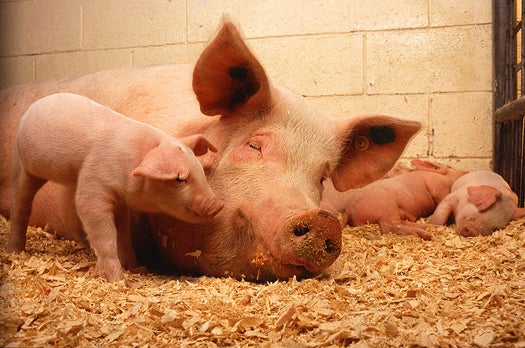 How do you make a pig more environmentally palatable? Researchers in Canada have decided to start with the nastiest stuff and work their way up. Enviropig, approved for limited production in Canada, is a genetically modified swine whose urine and feces contain 65 percent less phosphorous than a normal pig, a genomic tweak that could pay both environmental and financial dividends.

Phosphorous is a necessary element in living things, facilitating a smattering of cellular functions. But it’s also an environmental hazard, especially when it escapes into the water supply, where it can cause algal blooms that deplete oxygen levels in lakes, rivers and ocean deltas. That danger has led to strict legal regulations on the handling of animal waste that can be costly for pork producers.

Pigs get plenty of their necessary phosphorous from their daily intake of grains, but much of the phosphorous contained in pig feed is indigestible. To remedy this, farmers supplement their slop with the enzyme phytase that helps the pigs break down the excess phosphorous.

But the ingested enzyme isn’t as effective as phytase produced naturally in pigs, so scientists mucked about with the swine’s genes to make them produce their own phytase in salivary glands. Now when the pig consumes its daily grain, the phytase mixes with the phosphorous from the point of ingestion all the way through the digestive tract, breaking it down as the pig digests. The result: a 65 percent reduction in excreted phosphorous as more of the element is retained in the body.

To those whose stomachs turn at the idea of genetically modified foodstuffs, fear not; this little piggy won’t be going to market anytime soon. Enviropigs will spend years in controlled research settings before setting a single hoof into the larger gene pool. Years of safety trials await Enviropig before he’ll ever end up on a plate, but if deemed safe he could cut farmers’ feed supplement costs and help them meet those stringent rules that dictate exactly how they must get rid of their ample supply of phosphorous-rich pig poo.