In the 236 years since oxygen was identified as a life-giving necessity, no scientist anywhere has discovered a multicellular animal... 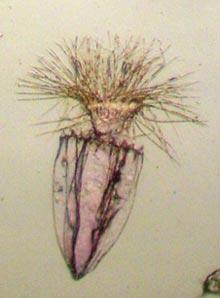 In the 236 years since oxygen was identified as a life-giving necessity, no scientist anywhere has discovered a multicellular animal capable of living without the stuff. Until now. Researchers from the Polytechnic University of Marche in Ancona, Italy*, have discovered three new species that live their entire life in an anoxic pit beneath the Mediterranean Sea. This discovery drastically revises science’s understand of where animals can thrive.

Prior to this discovery, the only organisms capable of life in oxygen-free environments were viruses and bacteria.

Unlike plants, all previously discovered animals, and fungi, the newly discovered animal species don’t use mitochondria, the cellular organelle that converts sugar and oxygen into water, CO2 and, energy, to power their cells. Instead, these weird creatures have an organelle that resembles a hydrogenosome, a cellular component used by some microbes to produce energy with complex enzymatic reactions.

The organisms themselves, none of which have been named yet, all belong to the phylum Loricifera, measure less than 0.04 inches long, and were found almost 10,000 feet down in sediment previous assumed to contain only viruses and bacteria. This is not the first time that scientists have discovered animals living in an anoxic environment, but all the previously discovered species needed to surface periodically for some O2. That makes these creatures the first animals ever discovered that spend their whole lives without oxygen.

How these animals evolved, and what else might be down in this forbidding environment remains to be seen. University of Marche scientists still have a great deal of analysis to do on these animals, but one thing is for sure: our understanding of animal life will never be the same.

* This post originally identified the researchers as working for Scripps Institution of Oceanography in La Jolla, California.