Until recently, radio astronomers have concentrated almost exclusively on the high-energy radiation streaming in towards Earth from exotic stellar bodies...

Until recently, radio astronomers have concentrated almost exclusively on the high-energy radiation streaming in towards Earth from exotic stellar bodies like pulsars, quasars, and super-massive black holes. But now, a new European observatory called the Low Frequency Array (LOFAR) has begun releasing data on the low-energy radiation that permeates the Universe.

While seemingly less sexy than high-energy research, low-energy radiation actually allows scientists to look even deeper into the past, to within 500,000 years of the Big Bang, and will provide a much more detailed account of some of the most mysterious periods of the Universe’s earliest days of existence. LOFAR is also going to be used by SETI to search for faint signs of extraterrestrial life

LOFAR began operating last year, and consists of listening stations in Great Britain, France, Germany, Sweden, and the Netherlands. Today, scientists released the first images from LOFAR, and the difference in resolution between these new pictures, and those taken using conventional high-energy radio telescopes, is striking to say the least.

The above picture shows how a seemingly uniform super-massive black hole appears much more complex when viewed through LOFAR’s more accurate low-energy sensors. Whereas the older pictures just show clumps of radiation, the LOFAR pic details how energy jets out from the center of the black hole, eventually coalescing in hot pools (the yellow balls at the top and bottom of the LOFAR pic on the right) light years away from the black hole center. 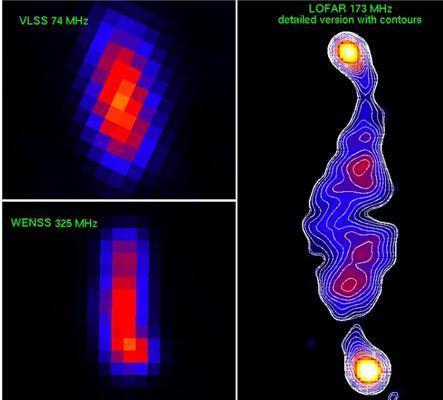 Low frequency radiation from the a super massive black hole, as taken by traditional radio telescopes (on the left), and LOFAR (on the right).

These new images don’t provide much new information about super-massive black holes as much as they demonstrate LOFAR’s unprecedentedly high sensitivity. By sussing out such high detail from a radiation-rich source like a black hole, LOFAR scientists have proven that this telescope has the goods to investigate the largely unexplored low-energy signals that remain as galactic fossils from the Universe’s younger days.