Late last year, English scientists created the first real-world instance of spin ice, a long-hypothesized type of crystal that can... 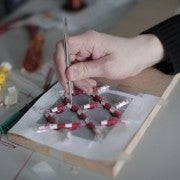 Late last year, English scientists created the first real-world instance of spin ice, a long-hypothesized type of crystal that can behave as a magnet with only one pole. These monopole magnets could form the basis of quantum computing memory, so it was disappointing to find out that the spin ice only behaved as a monopole at -454 degrees Fahrenheit. Scientists at Imperial College London have now revived the dream of monopole quantum memory by creating artificial spin ice that works at room temperature.

The artificial spin ice is formed from nano-scale cobalt rods assembled in a honeycomb structure. Each rod is a regular magnet, with a north and south pole. In the hexagonal structure of the honey comb, each joint involves the junction of one attractive, and two repelling charged ends of the cobalt magnets. By utilizing the charge imbalance at each vertex to control the flow of magnetic identity in a given space, the Imperial College scientists can trick the cobalt honeycomb into acting just like the magnetic monopole in natural spin ice.

This discovery brings the use of magnetic monopoles as a data storage system for quantum computing much closer to practicality by circumventing many of the problems posed by last year’s discovery. Now, instead of waiting years for engineers to figure out how natural spin ice can work at room temperature, quantum memory researchers only need to wait for the quantum computer processor developers to finally get on the ball and catch the hell up.