Large amounts of methane are leaking into the atmosphere from a section of seafloor under the East Siberian Arctic Shelf,... 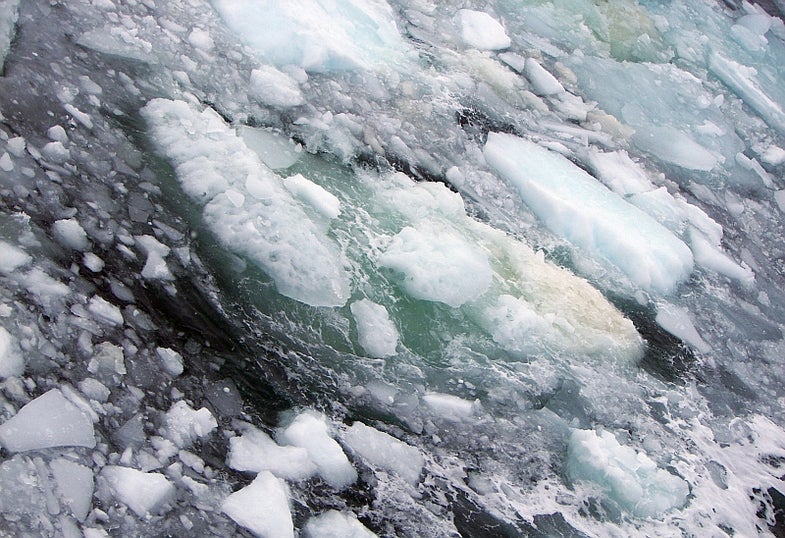 Photo courtesy of Igor Semiletov, University of Alaska Fairbanks--The sea surface above the East Siberian Arctic Shelf is full of ice and bubbles. Sonar is the only way to detect the vast clouds of methane bubbles rising from the seafloor.
SHARE

Large amounts of methane are leaking into the atmosphere from a section of seafloor under the East Siberian Arctic Shelf, according to new study by an international research team. Methane is a greenhouse gas that lies frozen in sediments and permafrost — frozen soil that remains below 0°C for several years — in arctic continental shelves.

Permafrost was thought to act as a leak-proof barrier that sealed in the methane, but warming arctic temperatures are thawing the permafrost.

And the frozen methane is not only dissolving in the water — it’s escaping into the atmosphere. The researchers say that release of just a fraction of the methane stored in the shelf could trigger sudden climate warming.

The East Siberian Arctic Shelf covers more than 2 million square kilometers of seafloor in the Arctic Ocean. Even prior to the new study, the region was known to be a significant source of methane — releasing 7 teragrams a year (a teragram equals about 1.1 million tons).

Previous studies in Siberia focused on methane escaping from thawing permafrost on land, but the new study went beyond the coast to offshore areas. From 2003 — 2008, the research team embarked on annual research cruises to sample seawater at various depths; they found that more than 80% of the deep water and more than half the surface water had methane levels that were eight times greater than that of normal seawater.

Besides storing large amounts of frozen methane, the East Siberian Arctic Shelf is also very shallow, which means that methane gas doesn’t have enough time to oxidize into carbon dioxide before reaching the surface. So, more methane reaches the atmosphere.

Methane release is one of the critical climate “feedbacks” that affect the entire planet’s climate system as the result of a warming Arctic region. The volume of methane currently venting from the East Siberian Arctic Shelf is about the same as the amount coming out of the entire planet’s oceans combined, according to researcher Natalia Shakhova, who co-led the study. “The climatic consequences of this are hard to predict,” she said.

The team plans to continue its studies, including drilling into the ocean floor to estimate the amount of methane stored there. A paper on the study appears in the March 5 issue of the journal Science.