Schrodinger would be pleased 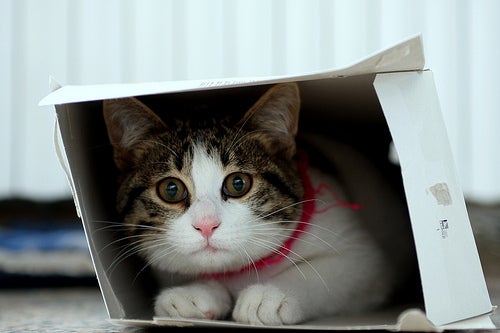 A quantum breakthrough could finally let Schrodinger's Cat out of that box. nromagna
SHARE

When we think of quantum mechanics, we often think of the very small and the very theoretical. Take Schrodinger’s Cat for instance; it’s an interesting thought exercise but not an experiment one would want to actually execute in his or her apartment. But a researcher at UC Santa Barbara has brought quantum systems down from the chalkboard and into plain sight, creating the first mechanical device large enough to be observed with the naked eye that behaves as a true quantum system, bridging the divide between the macro world of mechanical systems and the micro domain of quantum physics.

To create such a quantum mechanical system, physics researcher Andrew Cleland and his team had to cool the system to its quantum ground state to eliminate all thermal static. They did so by creating a mechanical resonator with an extremely high oscillation frequency — something like 6 billion cycles per second — and cooling it almost to absolute zero.

Then, using a superconducting quantum bit, or qubit, to measure and control the resonator’s quantum state, they excited a single phonon in the resonator, demonstrating the first steps toward manipulating a mechanical system through quantum control in a plainly observable way.

So what does all this have to do with the cat? Demonstrating a means to manipulate mechanical devices through quantum systems could open the door to better quantum information processing methods that could make today’s processing methods seem infinitesimally small by comparison. Moreover, there’s the possibility that, if the experiment could be sufficiently enlarged, we could test all kinds of quantum principles that make sense at the subatomic scale but are riddled with paradoxes when applied to the macro world. A spatially larger experiment based on these findings could test possible deviations from quantum mechanics at the macro scale, which in turn could explain away paradoxes like Schrodinger’s Cat.