Counting up the missing mass 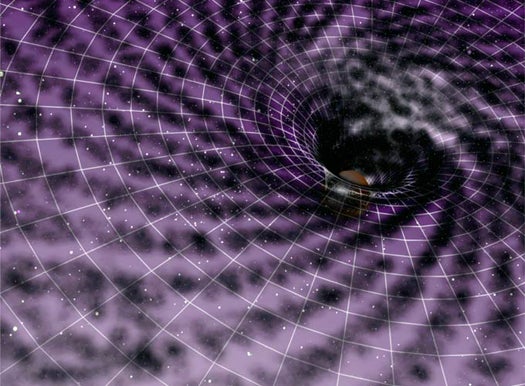 Dark matter, the material that makes up the majority of the matter in the universe, remains so mysterious that scientists don’t even know how much of it there is, let alone how it behaves. However, using new calculations about the interaction between black holes and dark matter, scientists have deduced an upper limit on the amount of dark matter in the Milky Way.

The researchers calculate that the maximum dark matter density comes in with around seven times the mass of the sun dispersed through a cubic-light year of space. If a section of dark matter that dense filled the space of our solar system, it would weigh about 14,000 times more than the mass of the eight planets, the asteroids, and the Sun combined.

By maintaining a relatively high mass, our galaxy’s dark matter generates enough gravity to hold the stars and nebulae together. Without that mass, everything in the galaxy would spin off into the void. However, if the dark matter within a particular cubic-light-year-sized volume of space reaches a density higher than 7 times the mass of the Sun, it would feed the super-massive black hole at the center of the galaxy so quickly that the black hole would grow out of control and devour the entire galaxy.

Interestingly, these findings also imply that the density of dark matter must remain relatively constant to prevent either of those outcomes. That means either dark matter isn’t getting sucked into the black hole, or replacement dark matter is replacing whatever does fall into the black hole. Since nothing science has ever observed can resist the pull of a black hole, and since we also don’t know where dark matter comes from in the first place, it looks like these new calculations might have raised as many questions as they answered.