Cracking the Poker Face: Your Eyes Betray the Numbers on Your Mind

Time to get some of those iridescent Chris Moneymaker glasses. According to a new study published in the journal Current... 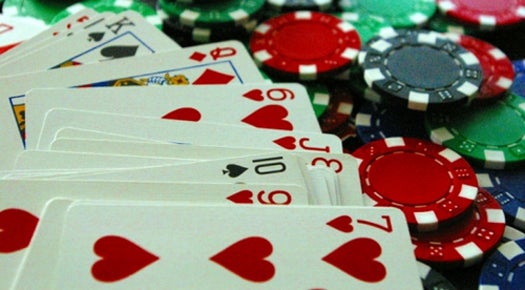 Time to get some of those iridescent Chris Moneymaker glasses. According to a new study published in the journal Current Biology your eyes could give away not just whether you have a good hand or not, but the actual numbers of the cards in your hand. Researchers asked study participants to name a string of random numbers, and by measuring horizontal and vertical eyes position the researchers were able to reliably predict the next number before it was spoken. Your bluff just might be toast.

The researchers noticed a distinct trend when participants were conjuring their random number strings: A leftward shift accompanied by a downward shift consistently indicated that the next number would be of lesser value than the one before. Likewise, an upward-right positioning suggested a larger number than the previous one. The degree of the movement corresponded to the size of shift in value.

Why does this happen? According to the University of Melbourne researcher who authored the study, our brains tend to code numbers spatially along a horizontal plane; smaller numbers fall to the left, larger ones to the right – similar to the way numbers would look if you started writing them in sequence on a piece of paper (1,2,3,4,5,6, etc.).

But don’t worry too much about your poker face. The researchers were only able to measure eye position during the 500-millisecond (that’s a half-second) interval between the subject’s thinking of the number and his stating it aloud, a difficult feat for your – or your opponents’ – naked eyes. But it could help researchers gain better insight into how our mind organizes fundamental concepts and how things we often consider abstract, like numbers, are connected to spatial reasoning.