As China and US Plan to Exploit “Burning Ice” for Fuel, the Ice Race Is On 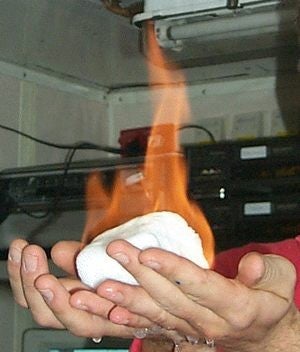 When methane and freezing cold water fuse under tremendous pressure, they create a substance as paradoxical as it coveted: burning ice. Earlier in the year, a report from the National Research Council identified the combustible water, also known as methane hydrate, as a potential source of natural gas. Now, according to the Chinese news organization Xinhau, China is joining the US, Japan, and South Korea in the hunt for this weird mineral.

Unfortunately, China lacks the capability to excavate the mineral. Even at an expedited pace, China’s Ministry of Land and Resources estimates it could be 10 to 15 years before any hydrate-derived gas finds its way into Chinese homes.