How poppies do their thing 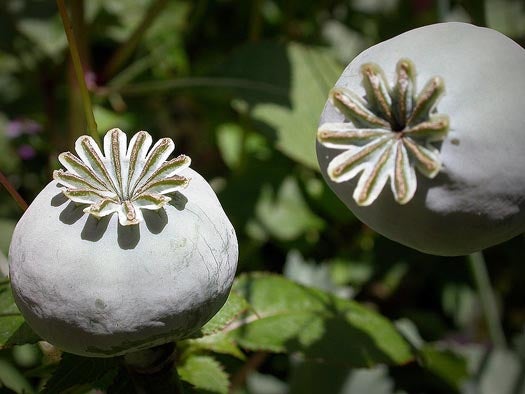 Morphine is potent, effective and in many cases the only pleasant aspect accompanying a visit to the surgeon. But the opium from which it is derived is the base ingredient for heroin and a politically problematic cash crop in places like Afghanistan. Now researchers working to unravel the morphine synthesis process have figured out two of the final, critical steps in that chain reaction, which could lead to better production methods and cheaper opiates like codeine and oxycodone — not that we have any clear idea what these fantastic, euphoria-inducing painkillers do inside the body.

The breakthrough centers on a couple of key enzymes that kick off the chemical reactions that convert the chemical precursors thebaine and codeine into morphine. The University of Calgary researchers identified the enzymes as well as the genes that encode them with their unique catalyzing capability, then used that information to verify their work through experimentation.

To make sure they had identified the right chemical components, one of the researchers injected some of the genes into some E. coli bacteria and left it in a flask overnight with some thebaine. The next morning the thebaine was gone, converted into morphine by the genetically modified bacteria.

This increased understanding of the morphine synthesis process could lead to myriad improvements in the development of opium-based painkillers. Scientists could produce high-yield plants that synthesize morphine more efficiently, driving down the high cost of painkillers. Researchers could also develop new ways of engineering microbes, like yeast or the E. coli used in the experiments, to make these painkillers, circumventing the complex problems surrounding opium poppy cultivation and driving down the demand for poppies grown in foreign markets.

Scientists could even use this knowledge to design a morphine-blocking virus that could render opium plants genetically unable to produce the highly marketable stuff that fuels both livelihoods and wars in places like Afghanistan. Such an undertaking, however, is fraught with both political and scientific land mines. An impotent opium crop could crash local economies, and the thought of a runaway virus crippling even peaceful, legal opium production is painful to say the least.