Sorry cryo-immortals, this preservation method is not for you 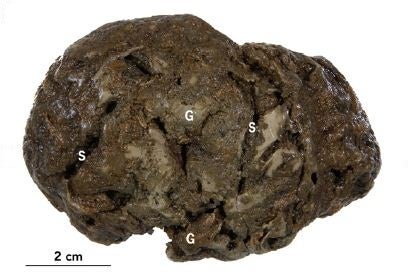 Even a stutter-gait zombie might turn up its nose at a 13th-century fossilized brain, but neuroscientists probably have good cause for excitement. An amazingly well-preserved 800-year-old infant brain found in northwestern France contains recognizable remnants of brain cells, according to a new study covered by Neurophilosophy.

Most soft tissue such as brain matter decomposes rapidly following death, and so fossilized brains with cells intact are typically hard to come by. This does not represent the oldest known specimen, but does appear to be one of the best-preserved. Brain imaging tests on the specimen revealed clear anatomical landmarks of the brain, including grey and white matter made up of cells and axon bundles, respectively.

A closer look showed glial (non-neuronal) cells and blood vessels. Pyramidal neurons from the hippocampus–a region of the brain involved with memory and navigation–also appeared under the microscope.

Just how the soft brain tissue ended up preserved remains a bit puzzling, but the researchers suggested that a wax-like preservative substance may form as bacteria break down fatty tissue without oxygen. The child’s remains were first dug up in 1998 in the city of Quimper, France, where environmental conditions could favor that preservation theory.

Neurobiologist Mo Costandi of Neurophilosophy describes the original paper slated for publication in the journal_NeuroImage_ as reading “somewhat like a medieval murder mystery,” and accordingly does not spoil much of the surprise with details on the circumstances of the 18-month-old infant’s death.

Well OK, there’s one big spoiler–cause of death apparently came from brain hemorrhaging due to a severe fracture near the top of the skull. Ouch.

We’re normally all about futuristic brain implants and cryogenic brain preservation for wounded soldiers, but we have to admit that a medieval-era brain carries its own interesting appeal.