The World’s First Photovoltaic Circuit That Powers Itself

If sustainability is key to the new energy economy, a team of University of Pennsylvania researchers has just taken a... 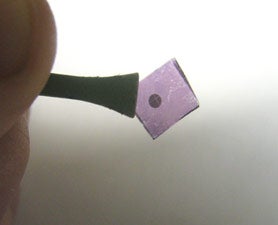 If sustainability is key to the new energy economy, a team of University of Pennsylvania researchers has just taken a big step toward the future by developing the first photovoltaic circuit that powers itself. The circuits could eventually be packed into touchscreens and other consumer devices that would run without a battery or any other source of power, as long as they have a beam of sunlight to harvest.

Like any incremental technology, these circuits aren’t going to be powering the next generation of cellphones or replace silicon photovoltaic cells anytime in the immediate future. Right now researchers can only get a tiny amount of power from the circuits. But as the technology scales and becomes more efficient, it should open up some exciting possibilities for the future.

Aside from powering devices or even small robots, the circuits could power computer calculations at the speed of light or be used to model the neural pathways of the brain.

But in the nearer term, the circuits could lead to devices that function sans power source and electrical transmission pathways. Devices that don’t need to carry power with them in a battery could obviously be pared way down in size, and – material hazards aside – would leave a negligible carbon footprint behind. Most practical devices would require some sort of backup power supply for the times when shade is unavoidable, but a mostly sustainable device is still a nice notion. Which makes it all the more frustrating that commercial applications of the tech are still likely years out.