Video: What Would You See As You Plummet Into a Black Hole?

A new simulator has the answer 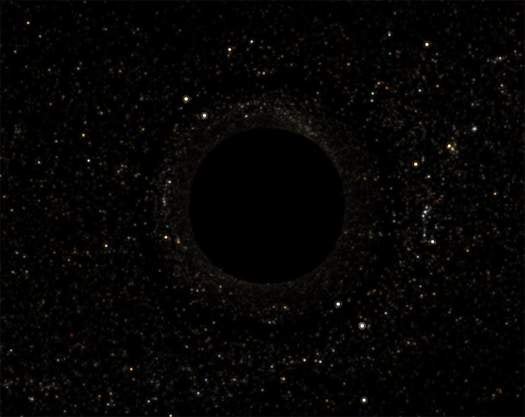 By definition, one can’t see a black hole itself, only its effect on the light of intervening stars. And without some serious equipment, even that’s a tall order. Luckily for all us amateur astronomers, Thomas Müller and Daniel Weiskopf of the University of Stuttgart, Germany, have created a simulation that uses actual star data to calculate exactly what seeing the Schwarzschild black hole would look like.

The simulation takes into account the position of 118,000 stars, the distortion caused by the black hole’s gravitational lens, and even Fraunhofer diffraction, to present the most realistic shot possible. The simulation also has two different modes, one where the viewer rotates around the black hole, and one where they slowly fall into it. Even crazier, the simulation models how the stars would appear to change color as the Doppler effect took action on a viewer falling towards the singularity at nearly the speed of light.

Here’s a sample video showing what the Schwarzschild black hole would look like to a viewer circling it at a distance from the singularity five times the the radius of the black hole’s event horizon.