Nurses usually pluck splinters from people’s flesh, not put them in. But a new rice-size implantable glucose sensor that monitors... 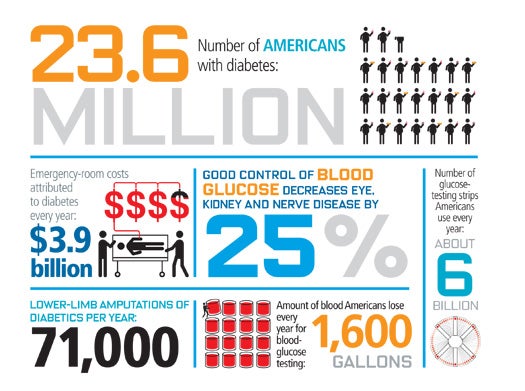 Nurses usually pluck splinters from people’s flesh, not put them in. But a new rice-size implantable glucose sensor that monitors blood sugar all day might mean less pain for diabetics.

A nurse would inject the sensor, called Glucowizzard, in a patient’s wrist and fit him with a wristband that powers the chip’s photovoltaic cells by flashing light pulses through the skin. The chip works like conventional monitors: An enzyme reacts with glucose in the blood and frees electrons in proportion to sugar levels. The chip senses the electrons and beams data to the bracelet, which pings the user if sugar levels are extreme. Running continuously, it could detect problems that might be missed by current finger-prick monitors, which are typically used only five times day.

The sensor would be replaced yearly—the expected life span of an anti-inflammatory coating preventing the immune system from attacking it. University of Connecticut researchers hope to start clinical trials in two years and have the device on sale by 2017. The tech can show the immediate effects of eating too much sugar, which could be especially helpful for the 84 percent of diabetics who are overweight or obese, says chemist Fotios Papadimitrakopoulos, a project leader. “Our device should help people make educated choices, not just about taking insulin, but about what they eat in the first place.”