Next Year, Give Your Valentine Custom-Engineered Flowers With Bespoke Scents

A root-beer bouquet, anyone? 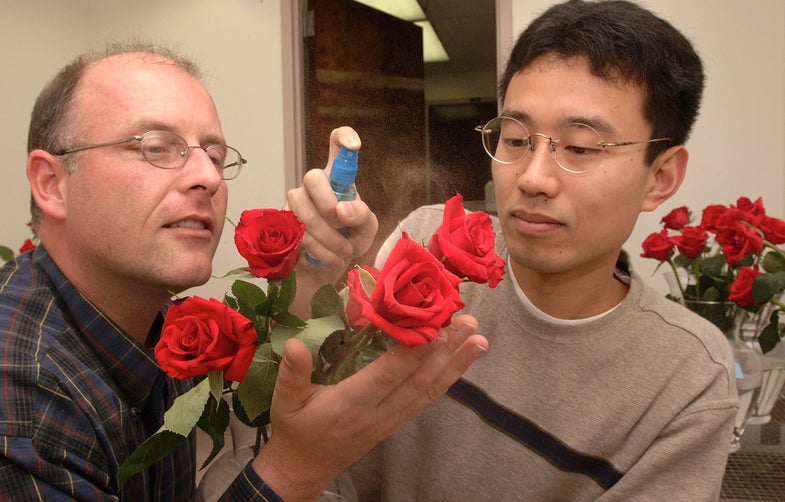 David Clark, an associate professor of environmental horticulture in UFs Institute of Food and Agricultural Sciences, and postdoctoral researcher Kenichi Shibuya spray roses with a lab-manufactured floral scent THURSDAY - FEB. 13, 2003. Plant breeding has led to bigger, longer-lasting blooms, but in the process many flowers have lost their scents. UF researchers are studying ways to put the scent back in through genetic engineering or developing formulations that can be applied to flowers with a spray or other methods. (AP Photo/University of Florida/IFAS/Tara Piasio).
SHARE

Future guys and gals looking for a sweet-smelling bouquet for Valentine’s Day might consider the root-beer-scented variety. Or they could opt for a fouler odor, if they want to send a different message. That’s all in the coming future, according to Discovery News.

Following centuries of humans breeding for bigger and prettier varieties, scientists at the University of Florida in Gainesville accidentally discovered the genes to make flowers smell nicer. They found the 12 or 13 unknown genes after sequencing the genome for petunias.

Some tweaking and amplification eventually showed that the genes allow petunias to create scents ranging from rose to wintergreen. And yes, root beer showed up in the batch.

Enhanced fragrances could also lead to better-tasting fruits and vegetables, given the link between scent and taste. Such genetically-engineered varieties won’t arrive for perhaps years, and only after the Food and Drug Administration gives its seal of approval.