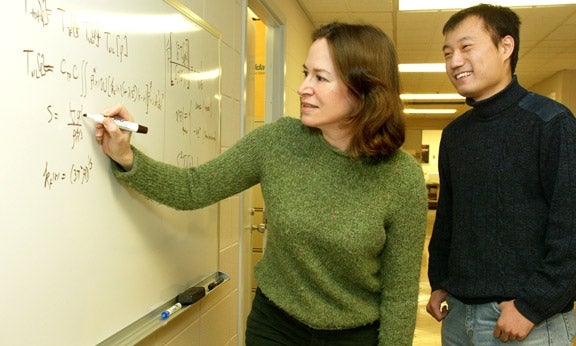 A new formula allows computers to simulate how new materials behave up to 100,000 times faster than previously possible, and could drastically speed up innovation relating to electronic devices and energy-efficient cars. Princeton engineers came up with the model based on an 80-year-old quantum physics puzzle.

But the Thomas-Fermi equation was based on a theoretical gas with electrons distributed evenly, and so it could not work for imperfect real materials.

Pierre Hohenberg and Walter Kohn, another Nobel laureate, managed to prove that the Thomas-Fermi equation could apply to real materials in 1964. But they only established the groundwork to prove the equation’s existence.

Researchers have tried calculating each atom’s energy from scratch to simulate how a material might behave, but simulations beyond just a few hundred atoms bogged down even the most powerful computers. That put a severe limit on the types of materials that researchers could simulate.

By contrast, the Princeton team stuck it out with the Thomas-Fermi equation. They eventually came up with a working model that could predict the kinetic energy of electrons in simple metals. A slight modification also allowed the model to also work for semiconductors, which find use in a wide variety of electronic devices.

“The equation scientists were using before was inefficient and consumed huge amounts of computing power, so we were limited to modeling only a few hundred atoms of a perfect material,” said Emily Carter, Princeton engineer who led the project.

“Important properties are actually determined by the flaws, but to understand those you need to look at thousands or tens of thousands of atoms so the defects are included. Using this new equation, we’ve been able to model up to a million atoms, so we get closer to the real properties of a substance.”

These new practical working equations should go a long way toward helping engineers realize the more futuristic concept vehicles, if they can run through many more material possibilities in the virtual realm. The saga also provides a good reminder that simulating atoms can prove just as challenging as modeling a star going supernova.