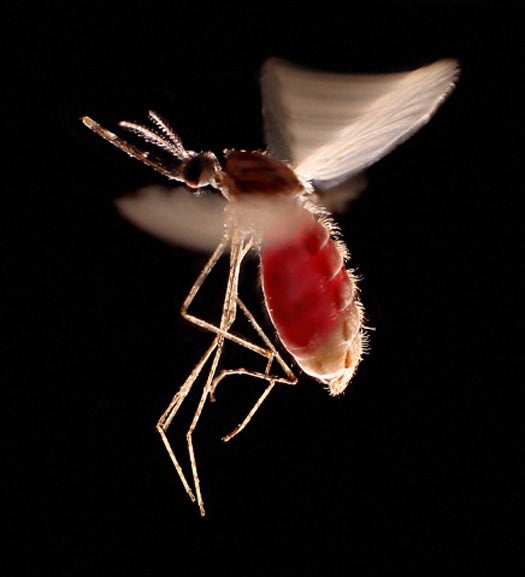 B0006056 Mosquito, Anopheles stephensi in flight Credit: Hugh Sturrock. Wellcome Images images@wellcome.ac.uk http://images.wellcome.ac.uk A mosquito (Anopheles stephensi) in flight with its abdomen full of blood. Through its role in the transmission of malaria and yellow fever, it is claimed that the mosquito has killed more than half the humans that have ever lived and it continues to kill between one and two million people a year, mainly young children. This particular species, Anopheles stephensi, is the insect vector that transmits malaria in India and Pakistan. Photograph 2005 Published: - Copyrighted work available under Creative Commons by-nc-nd 2.0 UK, see http://images.wellcome.ac.uk/indexplus/page/Prices.html. Wellcome Images
SHARE

Dengue fever, a painful and potentially deadly virus that causes joint pain extreme enough to earn the nickname “bonecrusher disease”, infects upwards of 100 million people every year. With no vaccine and no cure, there is little anyone can do to protect the 2.5 billion people currently at risk for infection. But University of California, Irvine professor Anthony James believes he can turn the very mosquitoes that spread the virus into the vector for prevention.

James has genetically engineered a special breed of mosquito with a sex-linked gene causing malformed wings. The male mosquitoes that carry the gene fly fine, but female offspring of those males cannot get airborne. And since it’s the females that spread dengue fever, James believes that releasing these genetically engineered males into the wild could result in proliferation of impotent female mosquitoes, and suppress the disease in under a year.

Naturally, this plan presents some logistical challenges. Aside from the vast number of male mosquitoes required to induce enough evolution to significantly lower dengue fever transmission, the flightless females may also fail to reproduce as effectively as their unmutated counterparts, ending any benefits in a single generation. In this case, that makes evolution both the cure and the impediment.