Just watch out for Morlocks 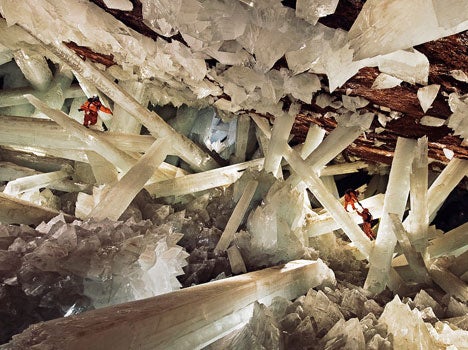 See those little dots climbing the crystals that look like ants? Those are people.

Casual spelunkers can’t enter the cave without risking their lives, unless they have the right breathing mask and cooling suit. Stifling temperatures of 122 degrees F combined with almost 100 percent humidity posed a deadly challenge for early explorers. Such conditions mean that every breath can lead to fluid condensing inside the lungs, which represents a less-than-ideal scenario for continued breathing.

But the cave’s wonders prove alluring once you get past the dangers. The BBC‘s new series “How the Earth Made Us” accompanies Iain Stewart, a geologist at the University of Plymouth in the UK, on a trip into the Naica silver mine.

Take a good look at the footage below, because the Cave of Crystals is destined to disappear once the mine owners decide to end operations and pull out their pumps. Then the mines and cave alike will flood once more.