Just like that, Abu Dhabi’s Masdar City has some competition. On Monday, South Korean officials announced a $14.6 billion plan... 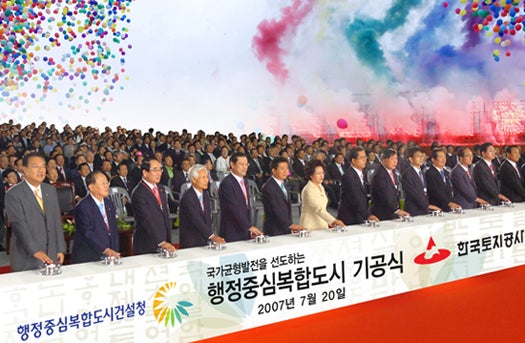 Just like that, Abu Dhabi’s Masdar City has some competition. On Monday, South Korean officials announced a $14.6 billion plan for a new self-sufficient city, high-tech hub of education and commerce that will be home to some of Korea’s biggest corporate names and centers of higher learning. The so-called Sejong City — sometimes called by its official name, the Multifunctional Administrative City (MAC) — aims to create a brand new, 21st century city in Chungcheong Province about 100 miles due south of Seoul by 2020.

The MAC was slated in 2005 to develop into a built-from-scratch city housing nine government ministries and four public agencies (the idea was even floated that it might serve as the capital of a unified Korean state). But as the plan bounced around the bureaucracy, it became apparent to the sitting government that the plan was inefficient from both administrative and economic standpoints. So the scheme was retooled to attract economic and educational investment, sweetening the deal by pursuing a policy of self-sustainability.

On the research side of things, the government is courting the International Science Business Belt and will establish the Korea Rare Isotope Accelerator, the Basic Science Research Institute and the Convergence Research Center at Sejong by 2015. The Korea Advanced Institute of Science and Technology and Korea University will also establish research campuses at Sejong, investing more than $12 billion between them. On top of that, another $7 billion in public and private funds will go toward scientific endeavors.

Sejong has also attracted Korean household names like Hanwha, Woongjin, Lotte and of course Samsung. The Korean electronics giant will locate five affiliate businesses at Sejong, including Samsung Electronics and Samsung LED, focusing on the development of solar power, fuel cells, LEDs and biotech. So far, private sector businesses alone have agreed to hire nearly 23,000 employees in Sejong by 2020, with the overarching goal of creating a quarter million jobs.

To be fair, Sejong is not aiming to become another Masdar, which plans to cover just 2.3 square miles and house just 50,000 residents. Masdar will be more or less a small, model super-city tapping the existing workforce in nearby Abu Dhabi, whereas Sejong will face the unique challenge of going from virtually zero to 500,000 residents in just a decade. But in their pursuits of sustainable cities, the two are actually collaborating on the same dream; Korean President Lee Myung-bak toured Masdar in December and inked a deal with research partners in the UAE to jointly develop renewables and sustainable technologies. If one sustainable city makes a marvel, hopefully two marks the beginning of a trend.