What happens when you add 64,000 tiny components to a base of oil and water? Depending on the nature of... 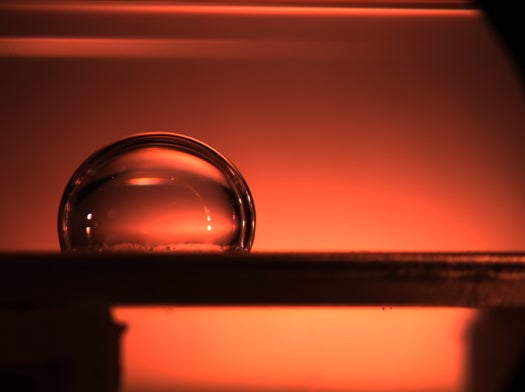 What happens when you add 64,000 tiny components to a base of oil and water? Depending on the nature of the components, you might end up with a delectable vinaigrette. University of Minnesota researchers found something even more tantalizing: a self-assembly method that is particularly effective at joining extremely small components in electronic devices.

The U of M crew was attempting to leverage gravity into an active ingredient in self-assembly, dunking pre-etched substrates into liquids and hoping gravity would guide component materials to their proper places. But limited success in coaxing the components into place led to low success rates. So the team hatched a scheme to create a two-dimensional plane of component materials and put them together assembly-line style, and they did it with a little salad dressing science.

The team coated the components — in this case silicon and gold particles just a few tens of millionths of a meter thick — with hydrophilic molecules on one side and hydrophobic molecules on the other. They then created their blank device, etching out depressions in the desired arrangement, lining them with a thin coat of low-temp solder.

They then engineered a precise mix of oil and water, wherein the oil layer sat atop the water (as oil is wont to do). Because one side of each component particle was hydrophilic and one side hydrophobic, the particles oriented themselves like a sheet along the oil-water boundary. The team then simply plunged the blank device through the barrier and slowly withdrew it; the sheet of component materials slowly followed the device up from the boundary; the attraction between the solder lining and the gold was enough to snap each particle neatly into place. Using this method, it took just three minutes to assemble a 64,000-component device.

The team thinks they can adopt this method to even smaller component parts and even larger finished devices, but for now it appears they’ve discovered a self-assembly process that can quickly and cheaply turn out just about any material from flexible plastics to hard semiconductors to metals. That translates into a superior and cheaper means of producing everything from solar cells to slim video displays to ultra-small semiconductors.