Who needs the Hitchhiker's Guide when you have spinning star cores? 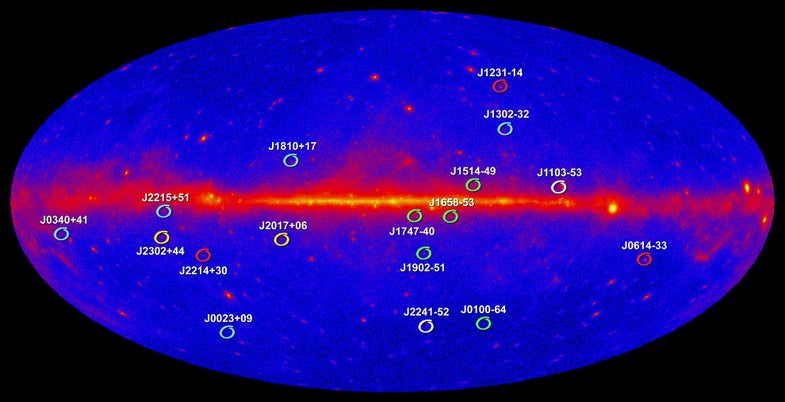 Millisecond pulsars left in the wake of supernovas could provide the basis for a type of “galactic GPS,” radio astronomers say. A growing constellation of known pulsars could allow the scientists to make the first direct detection of gravitational waves — a predicted consequence of Einstein’s relativity theory. The concept might even help guide future spacecraft and explorers, not to mention errant galactic hitchhikers.

The GPS that people know on Earth relies upon time-delay measurements from different satellite clocks to determine a certain location on Earth. But astronomers and future starfarers must look instead to the most precise clocks in the universe. Pulsars represent highly magnetized star cores which can spin faster than a kitchen blender at hundreds of times per second, and can rival human-made atomic clocks with their long-term consistency.

Astronomers hope to find direct evidence of passing gravitational waves, or ripples in space-time, by tracking timing changes among known millisecond pulsars spread across the sky. And an experimental concept aimed at using pulsars for space navigation was funded by none other than DARPA, the Defense Department’s lab for wild and wacky science, according to The Space Review.

One challenge has been the lack of known pulsars — Astronomers have only found 60 in the Milky Way galaxy since the first millisecond pulsar discovery 28 years ago. But NASA’s Fermi Gamma-ray Space Telescope has already begun narrowing the wide search to about 100 targets, many of which may turn out to be pulsars.

“Other surveys took a decade to find as many of these pulsars as we have,” said Scott Ransom, an astronomer at the National Radio Astronomy Observatory in Charlottesville. “Having Fermi tell us where to look is a huge advantage.”