It has long been thought that prions can't evolve. Turns out they can 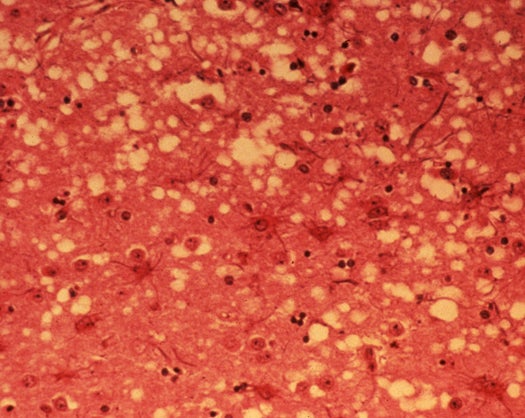 Scientists from the Scripps Research Institute have discovered that prions — tiny infectious bits of protein that can cause deadly neurodegenerative disease — are capable of evolution. While that might not seem groundbreaking, here’s the thing: while prions evolve by Darwinian, naturally selective processes, they are completely devoid of DNA and RNA.

Mammals produce the normal protein cousins of infectious prions as part of normal cell development, but during infection, misfolded or warped proteins can convert normal host prion protein into its own toxic, misfolded form. When this happens enough times, massive tissue and cell damage can occur. Infectious prions are linked to a number of fatal and untreatable diseases in humans and other animals, including mad cow disease and its rare human equivalent.

While prions have no nucleic acid genome component — DNA or RNA — they can reproduce. But previously it was thought that they could not evolve akin to other organisms like bacteria and viruses. As it turns out, the Scripps Florida team found that multiple mutations at the protein level can bring about such naturally selective adaptations as drug resistance, the characteristic that makes some viruses so difficult to effectively eradicate (see: malaria).

But while the idea of drug-resistant prions sounds universally bad, the findings also bear a silver lining: by zeroing in on non-infectious, normal prion protein, researchers might be able to leverage this characteristic into better therapeutics for existing untreatable prion-caused diseases. Since infectious prions need their normal cousins to feed their own replication and evolution, therapies that limit the supply of normal prion proteins could essentially starve the degenerative cycle that makes those illnesses so effective at killing their hosts.