The Battle for the Great Lakes: Army Corps of Engineers Versus Alien Fish

Humans built electrical barriers and dumped poison in the Illinois waterways, but an alien species still managed to leave a... 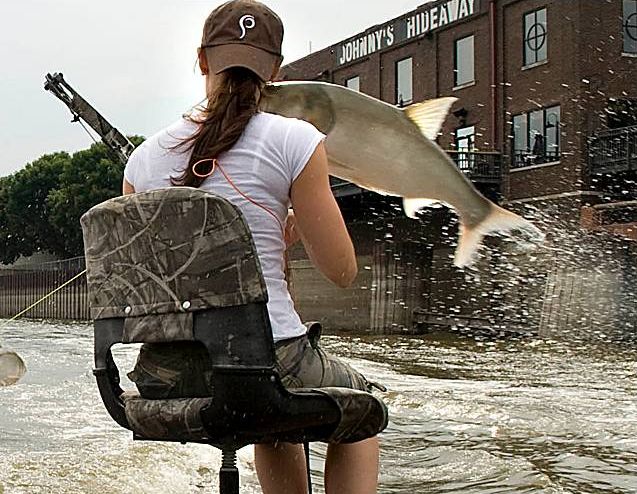 Humans built electrical barriers and dumped poison in the Illinois waterways, but an alien species still managed to leave a disturbing presence in the waters of Lake Michigan near Chicago. Fresh lake samples taken in December revealed the DNA of aggressive Asian carp, according to the Journal Sentinel. That news surfaced even as the U.S. Supreme Court announced yesterday that it had turned down a plea from Great Lakes states to force the U.S. Army Corps of Engineers to shut lakeside navigation locks against the intruders.

Asian carp feed on 20 percent of their weight in plankton daily and can grow up to 50 pounds. Their voracious appetite has allowed them to crowd out local fish species since beginning a northward migration from Arkansas in the 1970s, and they may now pose a threat to Lake Michigan’s $7 billion annual fishery. Oh, and they also happen to like leaping out of the water and occasionally breaking people’s jaws.

The Army Corps has built two electrical barriers to guard the waterways leading to Lake Michigan, but only the second-generation barrier has a big enough jolt to repel younger fish. That second barrier was only turned up to its full level in August, because of possible dangers to boaters.

Biologists suspect that the recent traces of Asian carp DNA — which most likely indicates the presence of a fish from the past two days — may come from some fish that slipped past the first-generation barrier over a year ago. That’s because the Army Corps turned off the system for a week in October 2008 in order to perform maintenance.

But waterways aren’t left entirely undefended when the barriers are down. Illinois fishery managers dumped 2,200 gallons of rotenone toxin into the Chicago River this past December as a stop-gap measure, during another maintenance period for one of the electrical barriers. The poison left tens of thousands of fish floating belly-up, including exactly one Asian carp, CBS 2 reports.

The presence of carp DNA in the lake does not exactly count as blood in the water, and biologists note that they have not caught any actual carp beyond the electrical barriers. But the state of Michigan and other Great Lake states plan to petition for the U.S. Supreme Court to reopen the case.

Even if the states somehow succeed in compelling the Army Corps to close its huge navigation locks, they are up against the barge industry and its need to move millions of tons of cargo each year through the waterways. And besides, the Army Corps remains uncertain that even the aged locks would do much to slow or halt a foreign species invasion.

[via Journal Sentinel and CBS 2]