Synthetic Nano-Platelets Added to Blood Cut Healing Time in Half

When a wounded patient begins bleeding, the most commonly employed solution is decidedly low-tech: apply pressure. But a group of... 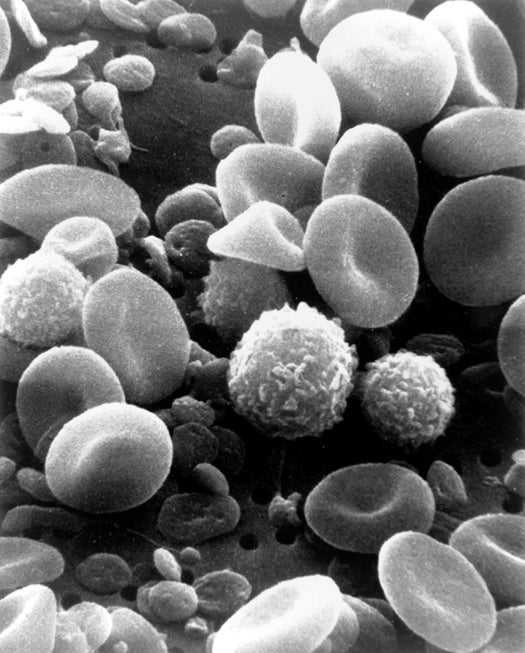 When a wounded patient begins bleeding, the most commonly employed solution is decidedly low-tech: apply pressure. But a group of medical researchers have developed injectible synthetic nanoparticles that could cut bleeding time in half.

The nanoparticles mimic the platelets already found in blood. When blood begins to flow from a wound, platelets bind together using fibrous protein molecules in an attempt to plug the breach before too much blood is lost. The synthetic platelets augment this process, bonding with natural blood platelets and acting as a nanostructure boosting the natural platelets’ ability to form a solid barrier that stops bleeding. Earlier today we saw artificial red blood cells; this week, everyone’s building better blood.

In tests, the nanoparticles cut bleeding in wounded rats in half; in humans that could double the time doctors have to stabilize a patient. More importantly, the synthetic platelets also stem internal bleeding, which is usually the hardest to stop, and for surgeons working in an ER, more difficult to locate. If injected into injured trauma patients by first responders, the platelets could significantly improve survival rates.

As such, the nanoparticles could also be effective on the battlefield, where they could have a serious impact on survival rates. Soldiers treated within an hour of being wounded have a decent chance of survival; after that first hour goes by, their chances decline precipitously. Halving the bleeding time, especially at the tiny internal traumas that IEDs are known to inflict, could stretch that one-hour window, buying soldiers more time to make it off the battlefield to proper, life-saving care.