Thanks to improved body armor, more US troops survive encounters with the enemy than ever before. Unfortunately, the flip side... 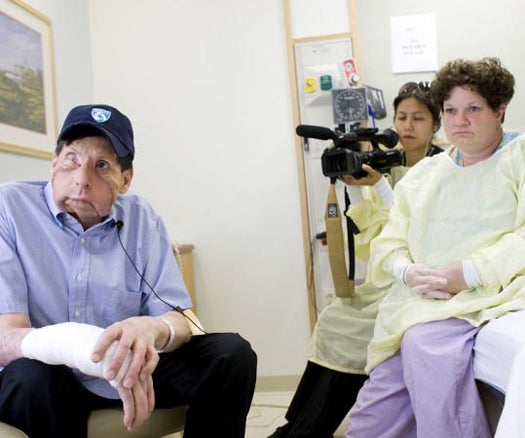 Thanks to improved body armor, more US troops survive encounters with the enemy than ever before. Unfortunately, the flip side of that equation means more soldiers return home with horrific injuries that would have killed them in older wars. The military has placed a lot of emphasis on developing limb replacements, but a new funding push by the Department of Defense (DoD) focuses on the emerging field of face transplants.

The DoD has awarded $3.4 million to Brigham and Women’s Hospital in Boston to in an attempt to advance face transplant technology. Earlier in the year, doctors at Brigham and Women’s Hospital performed America’s second face transplant, giving James Maki a new face after a disfiguring subway accident. With the new grant, the hospital will be able to perform six ot eight more operations over the next year and a half.

The research will focus on overcoming the vast technical challenges to transplanting a face. Besides the difficulty of the surgery, face transplant recipients require a complex combination of immunosuppressant drugs to keep their bodies from rejecting the new face. Since veterans are generally a young group, any soldier that receives a face transplant also sets down a course of drug therapy that will last many, many decades.

On the trillion-dollar-scale of military spending, $3.4 million doesn’t seem like a lot. But with a research field as young as face transplant surgery, any funding boost will surely help.