Water in them there craters 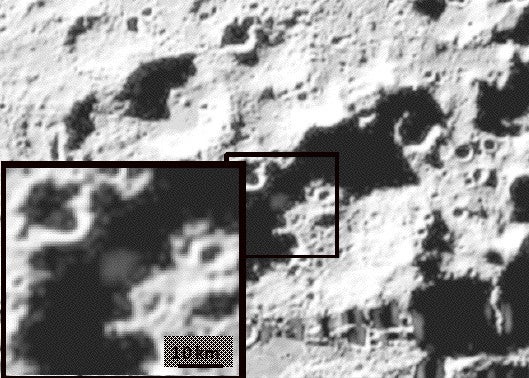 NASA’s moon-smashing mission may not have provided a huge show for the folks on Earth, but now there’s sweet vindication for scientists. The plume of lunar debris kicked up from ancient lunar crater kicked up 24 gallons of water, LCROSS mission staff reported today.

The October 9th impact from the main LCROSS impactor sent one plume arcing high above the rim of the crater Cabeus, and ejected another curtain of debris more laterally. Scientists identified water’s light-absorbing signature in the plume by examining data from the spacecraft’s spectrometers. They may have also spotted other “intriguing substances” that have lain dormant within the crater for billions of years.

“The concentration and distribution of water and other substances requires further analysis, but it is safe to say Cabeus holds water,” said Anthony Colaprete, the lead LCROSS scientist at NASA’s Ames Research Center in California.

This finding fits with earlier findings from three lunar probes that affirmed evidence of water on the moon. But the latest discovery may signal that water remains on the moon in greater amounts than just trace samples, and could point to the polar craters as future ice mining sites for lunar colonies.

NASA already has microwave technology and other ice-mining methods in the works. We can’t wait for that first taste of aqua-pure filtered lunar water.