A standard home audio speaker converts electrical signals into sound pulses in the air (via a somewhat cumbersome cone). Those... 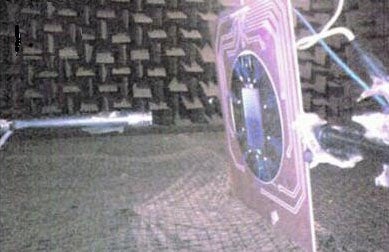 A standard home audio speaker converts electrical signals into sound pulses in the air (via a somewhat cumbersome cone). Those sound waves in turn cause tiny variations in air temperature, as waves disrupt surrounding air. So, scientists reasoned, why not create sound waves through those temperature fluctuations themselves?

In 2008 researchers built a loudspeaker from carbon nanotubes that creates sound from this thermoacoustic effect. Now Finnish researchers have created a far more simple thermoacoustic device using tiny aluminum wires suspended over a substrate, opening thermoacoustics to a far broader range of applications.

The device works by suspending aluminum wires 200 micrometers long, 3 micrometers wide and just 30 nanometers thick between supports at either end. These aluminum wire “air bridges” are then suspended just a few micrometers above a substrate. By applying controlled voltage to the conductive aluminum wires, small variations in temperature are produced, creating tiny sound waves. By adding a DC bias, the researchers enabled the loudspeakers to reproduce speech and music.

In experiments, scientists from the VTT Technical Research Center of Finland and the Helsinki University of Technology constructed several versions of the speaker, ranging from 6,000-wire arrays to some as large as 233,000 wires. The resulting speakers can generate high-pressure sound waves up to 100 decibels at a 8-cm ranges, and can reach frequencies up to 40,000 Hz, far beyond human hearing range of 20-20,000 Hz.

Next to their carbon nanotube counterpart, these thermoacoustic devices are far simpler, not to mention cheaper, to fabricate, making them potentially ideal for a range of applications in sonar, precision distance sensing, and ultrasound technologies. The researchers predict their devices could be used to create phased ultrasound arrays that can construct ultrasound beams of specific shape by driving the wires at different phases. Because the devices are so easy to fabricate, they could actually replace the conventional piezoelectric actuators used in many ultrasound devices.