Fluid dynamics generally lends itself to the study of fluids themselves, but by revisiting the theories of an 18th-century scientist,... 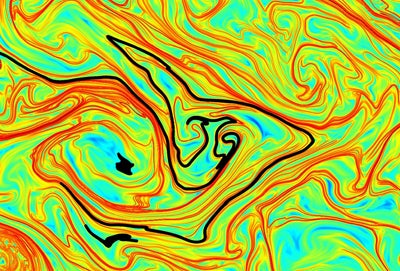 Fluid dynamics generally lends itself to the study of fluids themselves, but by revisiting the theories of an 18th-century scientist, researchers have found that studying invisible barriers that form between moving fluids may be far more enlightening than studying the actual fluids. Governing the movements of everything from the oceans to the air flow over a wing, so-called Lagrangian coherent structures are the “skeletons of the sea and air,” and are changing the way scientists understand and apply fluid dynamics, according to a report in the Economist.

Joseph-Louis Lagrange was one of the first to study modern fluid dynamics, but his theories were far ahead of the technology of his day. Now, using supercomputers, researchers are finding intricate structures that emerge between moving fluids that were previously unthinkable, visible only via complex mathematical calculations.

Lagrangian coherent structures are like the invisible boundaries that arise when people are moving in different directions in a crowded space; bodies tend to be pulled into groups moving together, a kind of chaos that is nonetheless structured. Borders develop between groups moving toward different goals, but only as long as the people are moving. Cease motion, and the boundaries no longer exist.

Because they are intangible, these boundaries are difficult to detect, but researchers have found that studying them is easier than studying the actual fluids being partitioned. As such, they are providing incredible insights into various technologies. At Hong Kong International Airport, lasers mounted near the runway track the movement of air flowing off the mountains, utilizing Lagrange’s math to predict updrafts and downdrafts. Other researchers are observing Langrangian coherent structures in Monterey Bay, Calif., modeling how shifting boundaries carry pollutants seaward and landward, helping authorities determine the best time to perform activities that risk polluting the bay.

Similarly, researchers in Florida and France are analyzing how oil spills would move through waters deemed prone to tanker disaster, while Cal Tech researcher John Dabiri (coincidentally, one of our Brilliant 10 last year) uses Langrangian theories to study the hunting behaviors of jellyfish (which, by the way, cannot cross the boundaries, giving Lagrange’s theories relevance in biological and behavioral disciplines as well). The theories can analyze large bodies like ocean currents, the Gulf Stream or hurricanes to smaller-scale movements, like the way boundaries affect drag and lift on an airplane wing.

Such boundaries between fluid bodies are more complex and elegant than anything dreamed of in the field of fluid dynamics even ten years ago, painting a powerful new picture of the way gases and liquids move. Perhaps more importantly, it offers researchers a reminder that it never hurts to dust off the old textbooks and re-examine the foundations upon which modern science stands.