Through Educate to Innovate, the White House hopes to return American science and technology learning to prominence 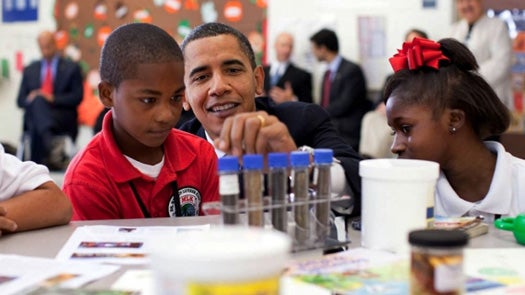 Elmo and Big Bird may represent old school learning compared to video games, but both Sesame Street and video game programmers have joined forces as part of a new White House initiative aimed at promoting science, engineering and math both in and out of the classroom.

Noting that for decades academic achievement among math and science students has been “losing ground” in the U.S., the president said that around the world “there is a hunger for knowledge, an insistence on excellence, a reverence for science and math and technology and learning. That used to be what we were about,” he said. “That’s what we’re going to be about again.”

The president also announced an annual science fair at the White House for the winners of national science and tech competitions. Since the NCAA athletics champs get to visit, so too should the nation’s mathletes. “Scientists and engineers ought to stand side-by-side with athletes and entertainers as role models,” Obama said. The genius inventors still in high school we featured earlier this year are surely taking note.

The initiative, dubbed Educate to Innovate, is kicking-off with five public-private partnerships that will be, according to the White House, worth more than $260 million in funding and in-kind support from a variety of companies and organizations:

• Time Warner Cable, FIRST Robotics, and the Coalition for Science After School have established the website connectamillionminds.com to help kids and parents find after-school activities in science, tech, engineering and math.

• Discovery Communications, along with partner universities and federal agencies will, among other things, be devoting a block of commercial-free kids programming on Discovery’s Science Channel.

• Sesame Street is in the midst of the first of two seasons that will focus on science and math.

• A National Lab Day that musters the on-going help of groups and individuals across scientific realms to support teachers’ projects in the classroom. Funded in part by the Hidary Foundation, the MacArthur Foundation, the Bill and Melinda Gates Foundation and others, the White House said the effort aims over the next four years to impact 100,000 teachers and 10 million students.

• The MacArthur Foundation, Sony, the Entertainment Software Association and others in the industry will be holding competitions for the design of free videogames that target math and science, including one that’s open only to kids.

We previously looked at a New York City public school that incorporates LittleBigPlanet and other games as part of its learning curriculum, and so seeing video games take a more prominent role in national science education sounds like an intriguing step.

After his speech, two students from a school in nearby Vienna, Va., showed the President a robot they’d built in six weeks, designed to pick up and lob moon rocks. Obama said he was interested in seeing the demo, given the ability of robotics to inspire young minds. “I also want to keep an eye on those robots,” he said, “in case they try anything.”