Implantable medical devices have improved the quality of life for many with conditions like arrhythmia or chronic heart failure, but... 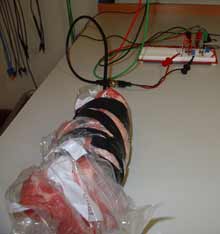 Researchers are testing their system using an implanted device in the abdominal wall of a cow.

Implantable medical devices have improved the quality of life for many with conditions like arrhythmia or chronic heart failure, but an increased reliance on electronics to keep our bodies ticking comes with inherent security risks; as more and more devices rely on wireless capabilities to communicate vital data to doctors, the possibility that devices could come under attack from third parties is harrowing at best.

Think about it: Would you want someone launching the equivalent of a denial-of-service attack on the device that keeps your heart beating properly?

In an effort to ensure control of implantable devices remains in the proper hands, researchers at the Swiss Federal Institute of Technology and the French National Institute for Research in Computer Science and Control are developing a security scheme based on ultrasound that determines the exact distance between a medical device and the device attempting to access it. Under the scheme, devices will be accessible to devices up to 10 meters away that complete the required series of authentication procedures. In emergency situations — a heart attack for instance — it will grant access to any device within close proximity to the patient. Otherwise, any device asking for personal data or giving commands to your implant would essentially have to be in the room with you.

Previous security schemes based on proximity have been proposed using standard radio signals, but researchers worry that proximity can be mimicked by an attacker using a radio signal booster. Ultrasound waves layered on top of radio signals ensure that implanted devices can gauge true distance; since the speed of sound is constant, devices can calculate with extreme accuracy the distance between implant and any device attempting access.

While researchers acknowledge that the current risks of attacks on medical devices are relatively small, in the future they will become more and more important as novel new ways to exploit implantable technologies are approved and implemented. Creating the bionic human is only as good as science’s ability to ensure that technology is safe. Because Rickrolling is funny; burning up the batteries in someone’s pacemaker is decidedly not.