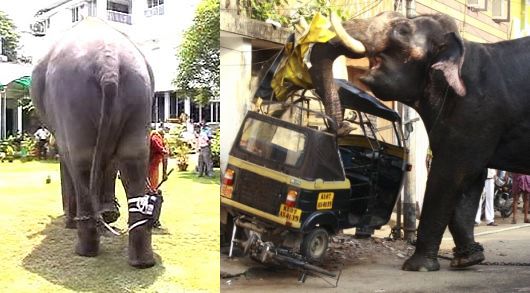 Who you gonna call when a normally placid pachyderm decides to act out? Enter Zachariah Matthew, a Mumbai engineer who created a remote-controlled immobilizing device to handle elephants on a rampage.

The “Violent Elephant Control Gear” takes the form of a 16-pound box fitted to the rear leg of an elephant. A human controller can press a remote device button to trigger a power cord that shoots out and ensnares the other rear leg of the elephant.

Matthew’s invention can supposedly restrain elephants weighing as much as 2 tons. A spokesman told The Daily Telegraph that the commercial launch will price it at a little more than $664 (or £400 or 30,000 rupees).

The device is also billed as a more surefire method for stopping rampaging elephants, as opposed to the current approach of shooting the elephants with anesthetic darts — a potentially tricky proposition if several shooters overestimate the dosage.

Fast Company suggests that the device may draw inadvertent inspiration from a certain Star Wars film … and we have to admit, those Imperial AT-AT Walkers always did look a bit elephantine.

Still, rampaging elephants aren’t giant, unfeeling mechanical walkers, but instead manifest the unhappiness of beasts of burden or circus animals. Fast Company also points out that hostile human-elephant interactions only continue to rise as humans encroach on a shrinking wild elephant habitat — a much bigger problem, beyond the control of any remote-controlled leg manacle devices, no matter how cool.

[via Fast Company and The Telegraph]