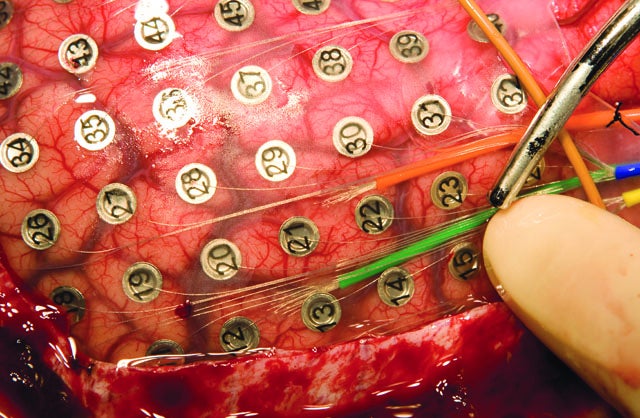 Microwires emerging from the green and orange tubes connect to two arrays of 16 microelectrodes. Each array is embedded in a small mat of clear, rubbery silicone. The mats are barely visible in this image. These microelectrode arrays sit on the brain without penetrating it, a step toward longer-lived, less invasive versions of "neural interfaces" that in recent experiments elsewhere have allowed paralyzed people to control a computer cursor with their thoughts. The new microelectrode arrays were placed in two patients at the University of Utah who already were undergoing brain surgery for severe epilepsy. The larger, numbered, metallic electrodes are used to locate the source of epileptic seizures in the brain, so the patients allowed the microelectrodes to be placed on their brains at the same time. Kelly Johnson
SHARE

Bundles of microelectrode wires fan out over a small area of a human brain. These electrodes were placed by neurosurgeons at the University of Utah to see if they could detect precise brain activity associated with motor movements. To their surprise, the hair’s-width microelectrodes, originally designed to study epilepsy, picked up the firings of small groups of neurons despite being merely set on the surface of the brain. Previously, this fine tracking was possible only by inserting wire probes directly into brain tissue, a potentially risky maneuver because, though thin, the probes can still damage nerve cells during insertion. Now the researchers are testing designs that cover more of the brain’s surface. “Our goal is to develop something [that sends signals to a robotic arm] that will be implanted into paralyzed patients and give them some control to interact with their environment,” says Bradley Greger, a professor of bioengineering who oversaw the work.