The Perfect Cram Drug? Scientists Identify Single Enzyme To Fix The Memory Of a Tired Brain

We’ve all been there, late at night and early in the morning, forcing any and every last morsel of knowledge... 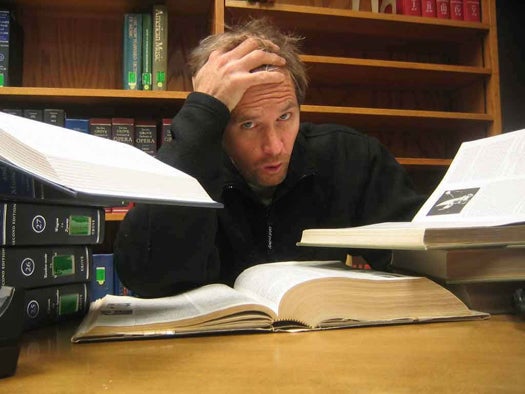 We’ve all been there, late at night and early in the morning, forcing any and every last morsel of knowledge into our weak and exhausted brains. But when the test flops down on our desk, we just stare blankly at the forbidding blue book page. All that knowledge, gone. Either it didn’t stick, or it has hid in some inaccessible crevasse deep in the brain.

Memory problems related to sleep deprivation have stymied everyone from college students getting ready for a biochemistry test to Army interrogators probing a tired detainee. Now, scientists have discovered that the memory loss associated with lack of sleep comes down to a single neurological pathway, opening up the possibility of a drug that fixes the memory of a tired brain.

The researches, working out of the University of Pennsylvania, looked at the brains of sleep deprived mice, and found that an enzyme called PDE4 actively inhibited the fixation of memory. When the tired mice were treated with drugs that inhibited PDE4, they remembered a fear stimulus no matter how tired they were when learning it.

Naturally, the researchers hope to use this discovery to help the memory of people suffering from sleep disorders. However, I have no doubt that every medical and law student reading this is actually waiting for the arrival of the ultimate cram drug.