Patch Uses Stem Cells To Plug Holes in The Heart

They say only time heals a broken heart, but Duke University researchers think they can do better. Using embryonic stem... 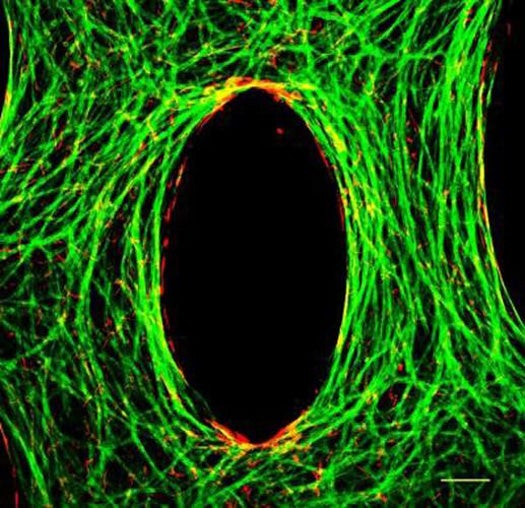 They say only time heals a broken heart, but Duke University researchers think they can do better. Using embryonic stem cells from mice and their own novel molding technique, a team of researchers at Duke has developed a three-dimensional heart cell “patch” that conducts electrical impulses and contracts, two all important characteristics of heart tissue.

Cardiomyocytes, the heart muscle cells that keep the blood pumping, are difficult to grow effectively because left to their own devices, they will simply develop into a disorganized clump of cells. To get around this, the team coaxed embryonic stem cells to develop into cardiomyocytes by placing them in an environment much like the one in which they develop naturally. By encapsulating the cells in a gel made of fibrin, a blood-clotting protein, the researchers provided the mechanical support for the cells to form an organized, three-dimensional structure.

But the key ingredient for the researchers were helper cells called cardiac fibroblasts. These cells make up as much as 60 percent of the cells present in the heart, and when introduced to the mold they caused the cardiomyocytes to pull together as if they were growing in a developing human heart. The alignment of the cells in the correct direction allows them to contract and carry electrical signals as though they are native tissue, allowing them to function fairly seamlessly alongside existing heart tissue.

After being cast in the fibrin mold, the patches can be placed on the heart where the tissue is thin or compromised and injected with cells that would then generate new heart tissue. But obstacles remain; aside from the many regulatory hurdles a procedure like the heart patch must leap, engineering a blood vessel supply to sustain the patch also presents substantial challenges. The use of embryonic stem cells also invites controversy, so the Duke team also plans to test their patch using non-embryonic stem cells.

Ethical and regulatory issues aside, the proof of concept is an important breakthrough for cardiac researchers who have a limited arsenal with which to battle heart disease, the leading cause of death in many developed countries. An effective non-embyronic stem cell heart patch would not only circumvent the problem of immune system reactions, but sidestep sensitive ethical land mines, clearing the way to put broken hearts on the mend.