Rounding out the 2009 science Nobel Prizes are Venkatraman Ramakrishnan, Thomas A. Steitz, and Ada E. Yonath, who will receive... 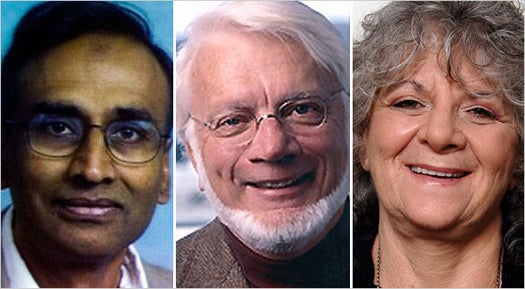 Rounding out the 2009 science Nobel Prizes are Venkatraman Ramakrishnan, Thomas A. Steitz, and Ada E. Yonath, who will receive the prize in chemistry for their work on an atomic-scale map of the ribosome.

Ribosomes are the cellular organelle responsible for assembling amino acids into proteins. If DNA is the blueprint, ribosomes are the construction workers. Ribosomes themselves are composed of a combination of RNA and specialized proteins.

The process of examining ribosomes at the finest possible resolution began over thirty years ago, when Ada Yonath first attempted to use X-rays to photograph a crystallized ribosome. Yonath’s results threw down the gauntlet to the rest of the scientific community, and scientists like Steitz and Ramakrishnan soon joined in the race to describe the organelle at smaller and smaller scales. Eventually, the work of everyone in the field produced a working model of the ribosome at the atomic level.

Understanding ribosomes has important implications in the health field, as many antibiotics kill bacteria by targeting the ribosome. The laureates’ work also produced ancillary benefits for other fields, as the X-ray crystallography they perfected while examining ribosomes can be applied to the imaging of other tiny, biological elements.