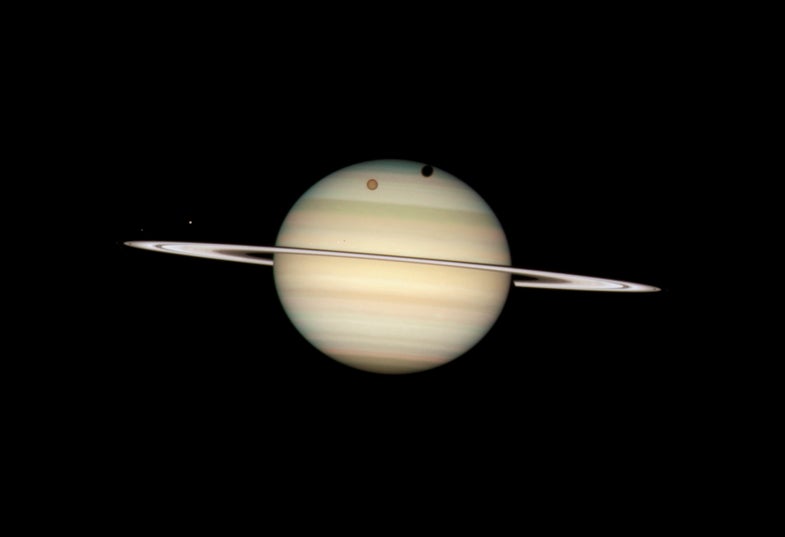 Titan—Saturn's largest moon—is just at the top of the image, casting a shadow near Saturn's north pole. From our view here on Earth, moons only cross in front of the planet when the rings lie in a nearly flat plane. The alignment, called a ring-plane crossing, happens every 14 or 15 years. Hubble captured a ring-plane crossing in 1995, and this one in 2009. The next will be in 2025—will Hubble still be around then? If not, perhaps its successor, the James Webb Space Telescope, will see it. NASA, ESA, and the Hubble Heritage Team (STScI/AURA)
SHARE

If the dinosaurs had had telescopes, they might have been able to witness something really cool happening in the sky. (No, not the incoming space rock that would ultimately destroy them, though it might’ve helped with that, too…) A new computer simulation suggests that Saturn’s iconic rings and many of its moons were born about 100 million years ago, when dinosaurs still roamed the Earth.

That’s the conclusion of a paper that was just published in the Astrophysical Journal.

Scientists have generally assumed Saturn’s rings and moons were born at the same time as the planet, about 4 billion years ago. That appears to be true for the moons that are farthest away from Saturn, including Titan, but there’s some evidence to indicate that the interior moons could be a lot newer than that.

While Earth has just one lonely moon, the orbits around Saturn are clogged with 62 moons. Those moons gravitationally pull at one another, gradually widening their orbits and moving further from the planet. And when the moons line up just right, their orbitals can get stretched or tilted.

By modeling those shifts, a team led by astronomer Matija Ćuk from the SETI Institute was able to analyze the history of Saturn’s moons. They found that many of the larger moons–including Tethys, Dione, and Rhea–have orbits that are less altered than scientists thought, implying that they haven’t been around long enough to skew each others’ orbits.

“So the question arises, what caused the recent birth of the inner moons?” asks Cuk in a press statement. “Our best guess is that Saturn had a similar collection of moons before, but their orbits were disturbed by a special kind of orbital resonance involving Saturn’s motion around the Sun. Eventually, the orbits of neighboring moons crossed, and these objects collided. From this rubble, the present set of moons and rings formed.”

There are still several unknowns, though. For instance, the authors acknowledge that if the moons are so young, it’s somewhat tricky trying to explain how they’ve become so heavily cratered in such a short amount of time. The theory will need to undergo more scrutiny before it becomes accepted as scientific fact.