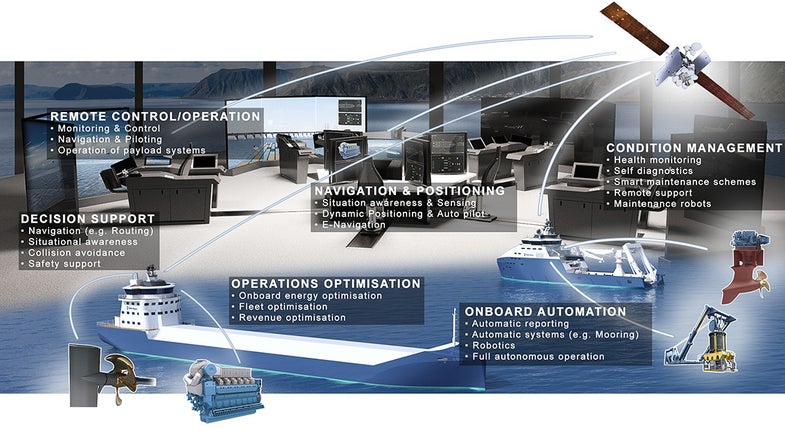 In ancient times, sailors navigated as much by the position of the stars at night as they did by familiar landscapes during the day. Now, in a twist on centuries of astronomical navigation, a satellite navigation company is joining with a robotic shipping initiative. If it all goes as planned, unmanned vessels will cross the globe, guided by signals sent from artificial objects in orbit, a mechanical facsimile of the oceans of old.

The Advanced Autonomous Waterborne Applications Initiative, as it is more technically known, is a project spearheaded by Rolls Royce to create ships that can cross the sea without humans on board. People take up already limited space on a ship, and they have biological needs that require even more space, so a ship without them can do without a galley, sleeping quarters, storing food for the crew, or anything else related to habitation. That’s a space savings, and also a security benefit: Without on-board crew as potential hostages, pirate attacks become just a material concern, and not a life-threatening one.

Inmarsat, the satellite company that just signed on to the project, will ferry the data from ship to shore. Inmarsat is set to launch the fourth satellite of its Global Xpress constellation in 2016. The network promises broadband-levels of data transfer. With this, remote control seamen could sail the seas as soon as the constellation is in place.