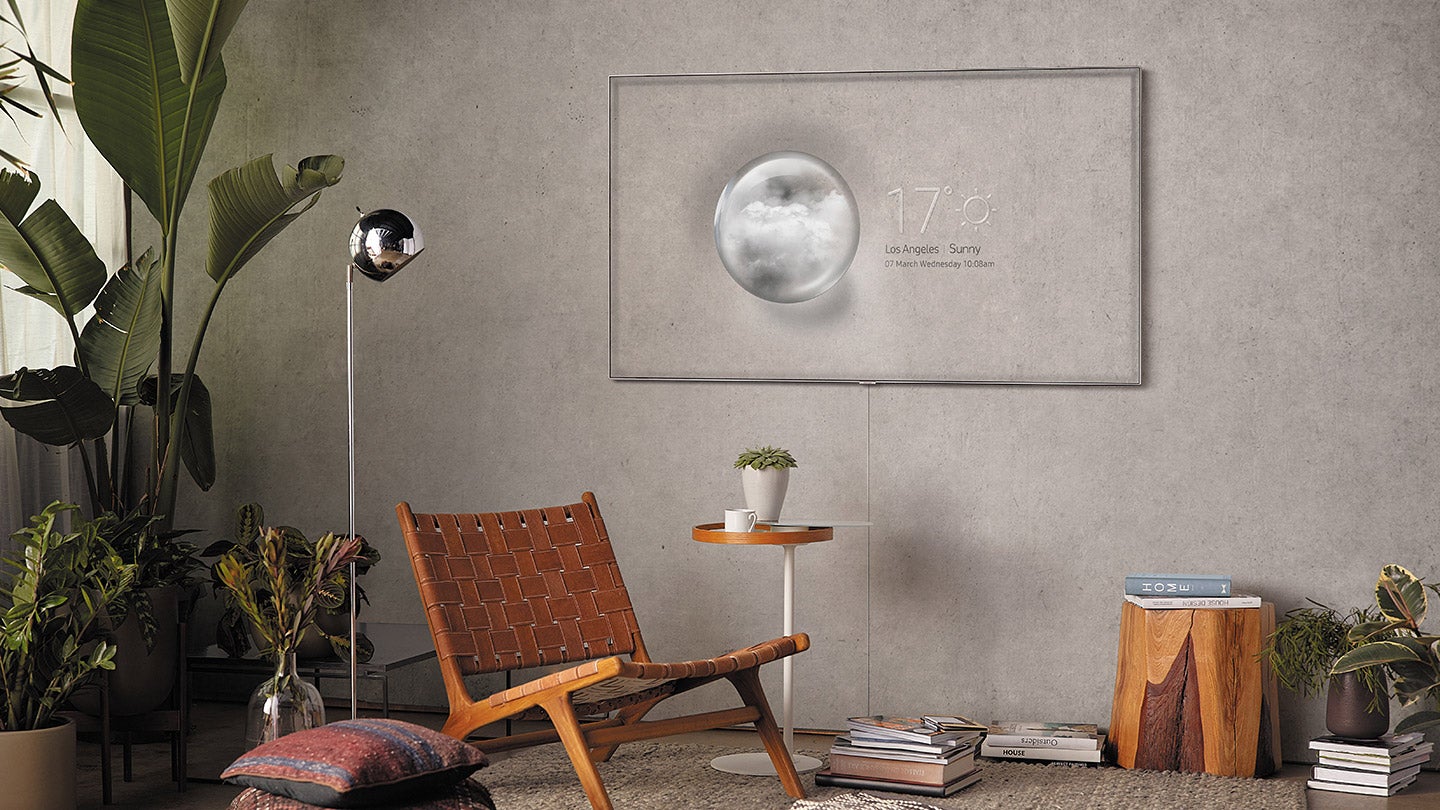 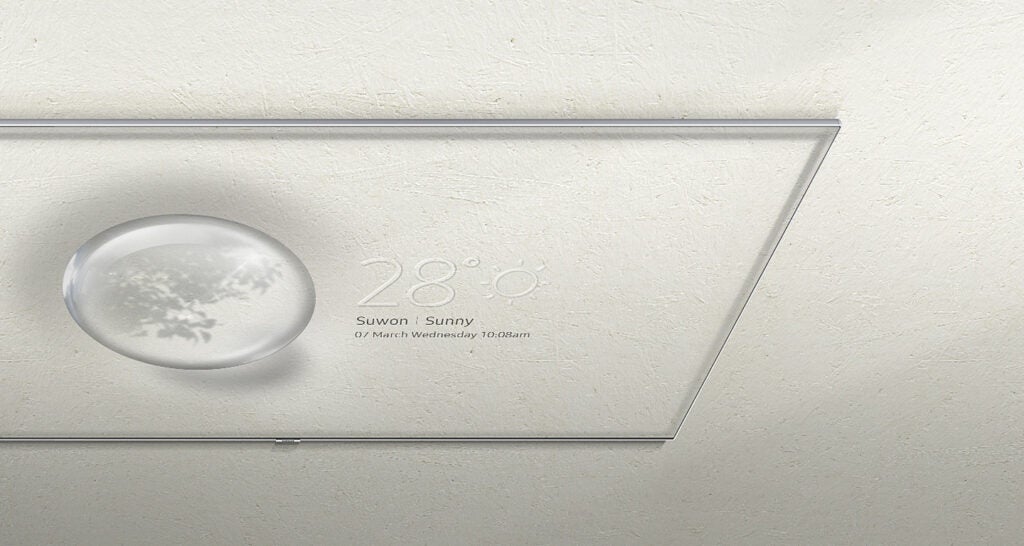 The race for the tiniest bezel is starting to make more sense.

Last year, smart speakers started integrating screens. Amazon introduced its Echo Show, which gave Alexa a box with a touchscreen on which it could display things like news, weather, and even some content. Then, at CES, the smart screen trend expanded to other platforms, like Google Assistant, which added hardware from Sony, LG, and Lenovo. This morning, Samsung is taking the smart screen concept to its logical conclusion by positioning its massive TVs as the center of a smart home experience via the company’s SmartThings platform.

When the televisions ship later this month, they will come equipped with Samsung’s digital assistant, Bixby—the same helpful, disembodied entity baked into the company’s Galaxy smartphones. By talking into the TV remotes, you can issue voice commands and requests that tie into other SmartThings-compatible devices, like Ring doorbells, Philips Hue lighting, and others. It can achieve most of the same tasks currently handled by Google Home or Amazon Alexa devices.

We’re used to turning televisions off when we’re not actively enjoying content, but Samsung wants to change that with Ambient Mode to make its massive displays less conspicuous. Ambient Mode turns the TV into an information display that also blends into the environment around it. 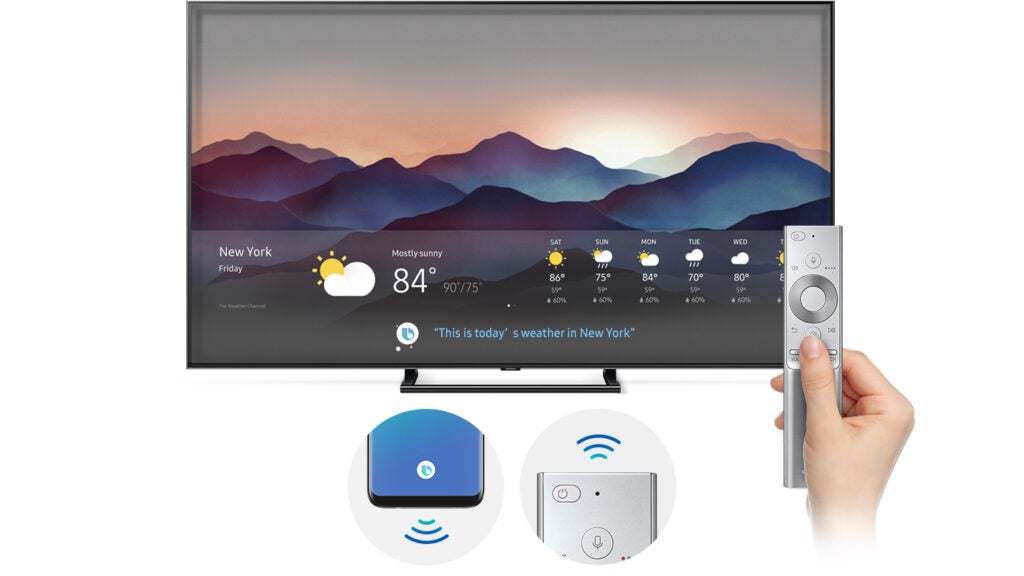 You can interact with Samsung’s digital assistant, Bixby, through the television as you can through a smartphone.

According to Samsung, users and designers are still battling to hide TVs, especially as the screens become bigger. Samsung says roughly 40 percent of the TVs it sold in 2017 were 65-inches or bigger, and it expects that number to jump over 50 percent in 2018. A TV that big is hard to hide. The smallest QLED TV you can buy in 2018 is a roomy 49-inches.

Ambient mode, however, attempts to make the TV transparent by filling in the screen with a picture of what’s behind it. When you install the TV, you use a Samsung app to take a photo of the display and its surroundings. Then, the TV itself extrapolates that image and fills in the picture to try and make it look transparent. If the TV is on a brick wall, for instance, it will show bricks. If the wall has a texture, the TV will try to mimic it. The same goes for a solid color. This is a fundamental shift from Samsung’s Frame TV, which was intended to replace a gaping black screen by showing works of art.

Once it’s all set up, the TV can show you notifications for things like headlines from the New York Times, or real-time weather reports. It can also show you information about the music you’re listening to, notifications from other devices on the SmartThings platform.

Because the TV has such a big screen, it can also be more subtle about what it shows. A demo during the event, for instance, placed an artist’s rendering of some mountains on the screen. The image changed slightly with the weather conditions it pulled from a weather service in real-time. So, the picture of the mountains glows when it’s sunny, and shifts to a more drab look when it’s cloudy or raining. 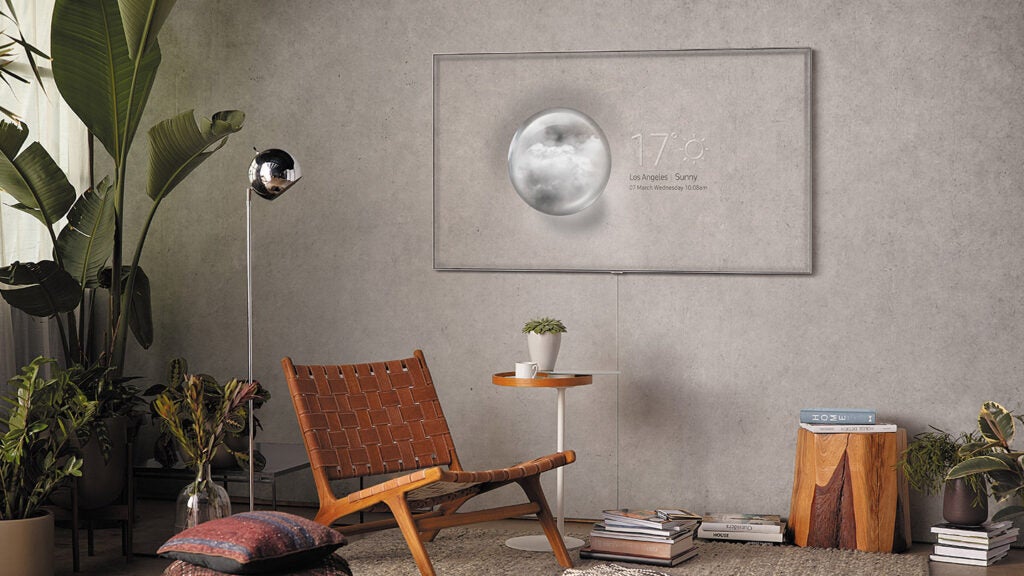 Even though the TVs are giant, they do a surprisingly good job of blending in with their surroundings. Samsung’s new single-cable hookup system helps accommodate the lack of space behind the display.

The TV isn’t a perfect replacement for a smart hub just yet, though. You can video chat with a friend using an Amazon Echo Show, but you can’t with one of Samsung’s massive displays. At least not yet. The integration also isn’t nearly as tight for useful accounts like calendars as it is with Google Assistant.

It also requires a fundamental shift in thinking about how we use TVs. It’s one thing to leave a tiny screen glowing in your house all the time, but it’s another to continuously feed power into a 65-inch mega-display at all hours of the day.

It ultimately seems like a move that makes a lot of sense for the company, which was the leader in TV sales during 2016, when it sold 47.9 million units. For now, Ambient Mode exists in high-end QLED sets, which use less power because they don’t need traditional backlights. But, that’s a big segment for the company and including a gateway to its smart home platform with each television is a nice way to integrate users into SmartThings with little to no friction at all.

Maybe this will finally be the end of those HGTV home designers constantly trying to hide TVs behind doors, paintings, and other decorative doodads.