And it won't catch on fire. We hope. 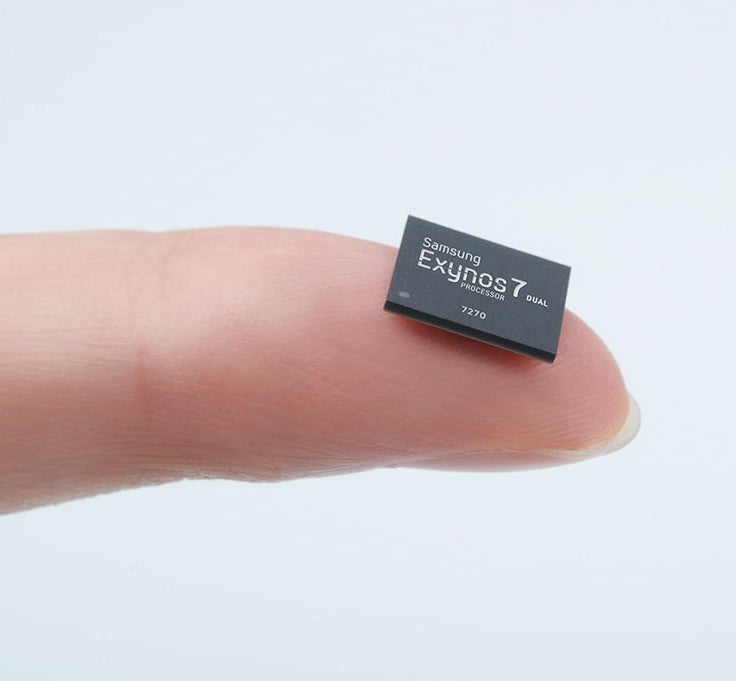 When Samsung isn’t making phones that will light your pocket on fire, the company is serving up all kinds of other hardware. Not just virtual reality headsets and smart refrigerators, but even the hardware that goes inside your hardware. Many products, including even ones bearing an Apple logo, benefit from Samsung’s hardware prowess. With the announcement of the tiny Exynos 7 Dual 7270 chip, Samsung flexes on the competition just a bit more.

Samsung announced the new chip today. The South Korean phone maker has, in one tiny package, bundled in a dual-core processor, DRAM (used for running apps simultaneously) and NAND flash (meant for storage space). The chip also packs in Bluetooth and wifi capabilities, and FM radio.

All of this loaded into a tiny fingertip-sized, 100-square-millimeter chip means smaller devices that can still pack a wallop. The chip makes use of 14-nanometer transistor technology, passing around data through spaces tinier than the width of a human hair. All while offering a better alternative to larger, 22-nanometer style chips. Bulky wrist wearables or pendant devices can slim down and still offer necessary wireless technologies to provide convenience. If the chip proves powerful enough, perhaps it could make its way to larger devices in order to slim down the overall footprint.

No word on when we can expect devices that use the Exynos 7 Dual 7270, but we could presumably see Samsung’s next Gear S device make use of the chip.