Researchers are developing eco-friendly ways to blow stuff up 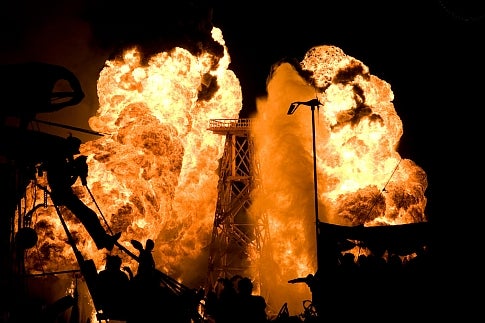 Who would think to make explosives more eco-friendly? After all, if enough explosives are used, one may argue, there won’t be any environment left to be friendly to. But a team of scientists in California are trying to keep the environment safe even while producing a material that helps blow it up.

Researchers from the Lawrence Livermore National Laboratory added environmentally friendly solvents to an explosive called TATB, as part of a project supported by the Transformational Material Initiative Laboratory Research and Development initiative. The result was improved crystal quality and chemical purity of the explosive. According to Larry Fried, the project’s principle investigator, improved crystal quality and purity leads to safer explosive material, because the material is less likely to react violently to heat or impact.

To achieve their results, the team used “green” ionic liquids in place of a class of chemicals called molecular crystals. Used as building blocks for a variety of applications, molecular crystals cannot be dissolved in common organic liquids, which means they form poor-quality crystals of limited size. The ionic liquids, however, are extremely effective in dissolving hydrogen-bonded materials, and produced defect-free crystals that were more than 97 percent TATB.

The Livermore researchers aren’t the only scientists working on more eco-friendly explosives. In May, German researchers found that conventional explosives released too much carbon after detonation. Using a class of chemicals called tetrazoles, which derive their explosive energy from nitrogen instead of carbon, the researchers set off small bombs in their laboratory. They found that the tetrazole explosives were less toxic and were less sensitive to shock than carbon-based materials.

The researchers at LLNL have also found less explosive applications for their discovery. Ionic liquids are highly effective in dissolving cellulose, which may lead to more efficient ways to create renewable energy, and may aid in the production of plastics or pharmaceutical products.