Rosetta’s Philae Lander Is In Trouble 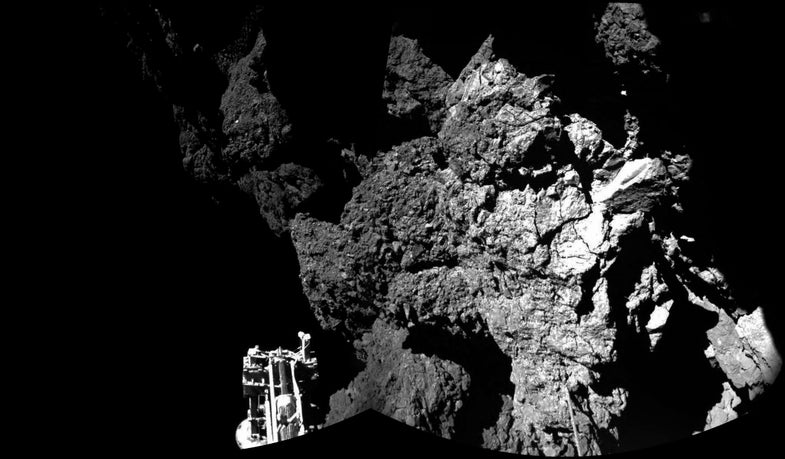 This first-ever image from a comet's surface shows a steep cliff, with one of the lander's feet is in the foreground. ESA
SHARE

Faced with a missing lander and a limited battery life, ESA scientists are trying out a risky maneuver. Philae is deploying its drill today, in hopes of securing and analyzing at least one soil sample from the comet. The lander may be keeled over on its side, however, so the spinning 10-inch drillbit could make it do a cartwheel instead–which could end the mission or put the probe in a better position to receive sunlight.

If Philae is still alive after the drilling, ESA may pursue a few other last-ditch efforts to get the lander standing, including attempting to fire the thrusters and/or harpoons again, and/or moving the landing legs to try to bounce it to a sunnier locale.

The lander’s solar panels are receiving a little sunlight, but it’s not enough, and the battery could die anytime over the next few days.

The next time ESA will have an opportunity to communicate with Philae will be this evening. If the battery still has enough juice to send out a signal, scientists will have a clearer idea as to whether the soil analysis worked, and whether there’s any hope of repositioning the probe.

BBC and the Guardian

Yesterday the European Space Agency made history by completing the first soft landing on a comet. The Rosetta mission successfully dropped the lander Philae onto Comet 67P/Churyumov-Gerasimenko, and it has already sent back data and photos.

But the landing was not as soft as scientists were expecting: After the failure of Philae’s thrusters and harpoons, which would have anchored the lander to the surface, the lander seems to have bounced to a height of about half a mile. After a second, smaller bounce, it settled down on an unknown site likely half a mile away from its intended target. This region is a jagged landscape near what appears to be a steep cliff.

Because of the shadow from the cliff, the lander is only getting a few hours of sunlight per day. That’s a problem, since it’s 60-hour battery needs to recharge via solar panels.

One of Philae’s feet is not touching the surface of the comet, and the other two have not screwed in. This means the lander is not anchored, and probably will not be able to drill into the comet’s soil without causing damage to the probe. If mission control tries to deploy the harpoon anchors now, it might send the lander flying into space again.

BBC reports that the ESA may try to move the lander to a new location.

The $1.4 billion Rosetta mission traveled 10-years and 4 billion miles to reach the comet. By studying its dust, gas, and ice content, the mission hopes to learn about the conditions of the early solar system and whether comets could have carried molecules that helped life on Earth develop.

Despite the unexpected circumstances, ESA is optimistic that the mission will still return valuable science.