Robot Roach Can Jump Up To Five Feet High

One giant leap for bot-kind 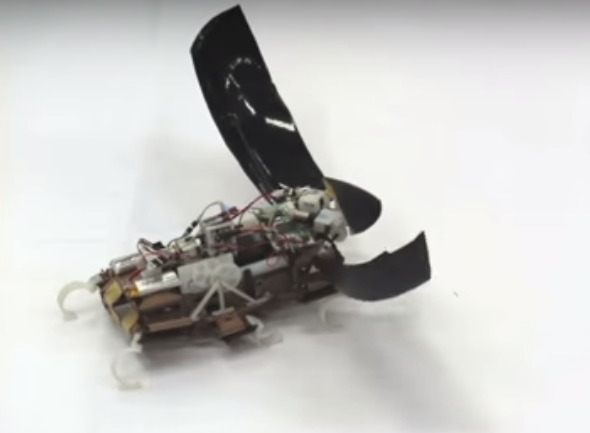 Roach robots are evolving. First, they needed to work together with a fellow robo roach to climb over things. Now, a collaboration between Seoul National University in South Korea and UC Berkeley has developed a roach that goes leaps and bounds beyond that. IEEE Spectrum reports that the researchers showed off their appropriately named JumpRoACH at the IEEE International Conference on Robotics and Automation in Stockholm this month.

The JumpRoACH can leap a little more than five feet high, which is impressive for its about 2 ounce size. It uses a Dash Robotics body, which houses a DC motor, eight latex bands, and a diamond-shaped contraption that has two joints.

After it reaches its jumping destination, the roach then uses its shell to right itself so it’s ready to leap again. Eventually, the roach bot will get wings, which would help it glide even further during its hops. Eventually, this jumping mechanism could be scaled up to larger robots, too.

Watch the JumpRoACH in action in the video below: